Calmly Worrying About China is Good For All of Us 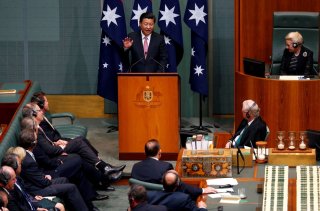 Getting other countries to openly defer to China’s interests has long been viewed by China’s leaders as a symbol of their international worth. When that can no longer be done, or at least becomes much harder to do, what then? Will the continued shift in capitals around the world away from doing anything to maintain a ‘good relationship’ with China towards a new hard-headed approach be accepted by Beijing in time, or will it change China’s view of its external environment in ways that make life more challenging for all of us?

This question is a source of much anxiety around the world, and the reason why the international system looks more precarious now than it has been in decades. All governments need to be as prepared as they can be for an answer they do not like.

For Australia, that means continuing to demonstrate our willingness to defend our sovereignty and national interests in ways that are considered, consistent and easy to understand. It also means putting forward an Australian vision of the future of the region and the world that helps more Australians appreciate the nature of the China challenge and the context in which the bilateral relationship has deteriorated.

A larger cross-section of the Australian community needs to understand that our words and actions are now linked to China’s conceptions of its threat environment in ways that they were not before. And that we are in the nerve-striking phase of a long game that compartmentalism and short-sightedness will not help us play well. We are more vulnerable than we used to be, but necessarily so.

The more widely this is understood, the more likely calls from some Australian business leaders for Canberra to just ‘fix’ the relationship through any means will be seen for what they are: misrepresentations of Australia’s long-term national interests and the scale and nature of the challenge we are facing.

Raising public awareness is in some respects more important and useful than trying to penetrate the black box of Chinese government decision-making, and certainly easier. Much time and energy can be wasted predicting how China will react to the next ‘crossed line’ or whether a punishment for one indiscretion was intended to signal something to someone else—often to no avail. But making people think about what it is about China’s political system that makes a genuinely constructive bilateral relationship difficult to build serves practical functions.

A more attuned public understanding of the Chinese government’s modus operandi would certainly make it more difficult for Beijing to spread disinformation intended to make us second-guess our own positions and decisions. This has been done in the past to open divisions in the Australian community on issues important to China or to simply get us to dwell on isolated singular developments at the expense of other, more important ones. It would also help protect against the prospect of one Australian political party deciding to define itself in opposition to another’s China policy—something Beijing is hoping will eventually happen and would be eager to exploit if or when it does.

Australia’s relationship with China is complex and evolving. Popular opinion of it needs to be informed and measured, not hard and panicked. Worrying calmy together about the right things at the right time will prevent the mistrust of China that polling indicates has long been present in the Australian community from morphing into self-defeating fear and anger.

And it will probably make us feel better.