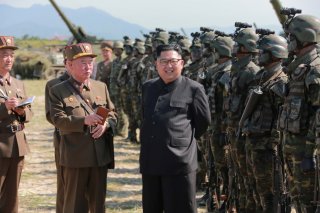 Here's What You Need to Remember: North Korean special forces have evolved from a nuisance force designed to stage attacks in the enemy’s rear into something far more dangerous. Their ability to distribute nuclear, chemical, biological, or radiological weapons could, if successful, kill thousands of civilians.

One of the most vital parts of North Korea’s war machine is one that relies the most on so-called “soldier power” skills. North Korea has likely the largest special forces organization in the world, numbering two hundred thousand men—and women—trained in unconventional warfare. Pyongyang’s commandos are trained to operate throughout the Korean Peninsula, and possibly beyond, to present an asymmetric threat to its enemies.

Kyle Mizokami is a defense and national-security writer based in San Francisco who has appeared in the Diplomat, Foreign Policy, War is Boring and the Daily Beast. In 2009, he cofounded the defense and security blog Japan Security Watch. You can follow him on Twitter: @KyleMizokami. (This first appeared in April 2017.)