Can China Defend its South China Sea Bases? The Answer Is No. 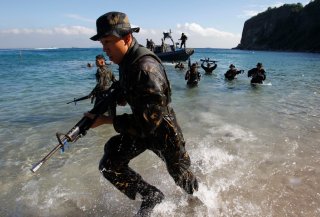 Here's What You Need To Remember: The islands of the SCS have some military relevance, but are more important as a political claim to waterways and undersea resources. Militarily, they represent a thin crust on China’s A2/AD system. Under certain conditions this crust could disrupt U.S. freedom of action, but it won’t be hard for the United States’ Air Force and Navy to punch through.

Image: Philippine Military Academy (PMA) cadets leave their boat and go ashore during a joint field training exercise at the Marines' training centre in Ternate, Cavite city, south of Manila May 29, 2013. Future military officers in the Philippines undergo annual drills at a Marines base for training on coastal defense and amphibious operations as the nation shifts its security policy from fighting rebels to defending territories in disputed waters in South China Sea, according to the military. REUTERS/Romeo Ranoco.