Can the Eurofighter Fend Off Russia’s Sukhoi S-35 Fighter? 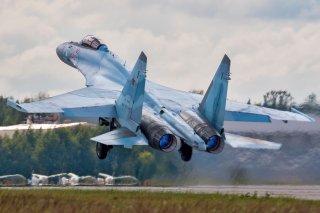 Here's What You Need to Remember: There is no question that Russian jets have come a long way technologically since the end of the Cold War. The Su-30 and especially the Su-35 are excellent fighters—and they’ll be a handful for any Western fourth-generation fighter in the event of a war.

Technology wise, neither the Su-35 Flanker nor the Typhoon is currently equipped with an active electronically scanned array radar, but both have good beyond visual range capability. Both jets are designed for high speed, high altitude beyond visual range engagements, and as such, can impart an enormous amount of launch energy to their beyond visual range weapons. But it is not known how effective Russian combat identification systems are—you have to know what you’re shooting at. Further, the Typhoon’s cockpit and pilot vehicle interface are excellent—much better than anything found on the current Flanker variants.