Can the Eurofighter Typhoon Beat the F-22 Raptor in a Dogfight? 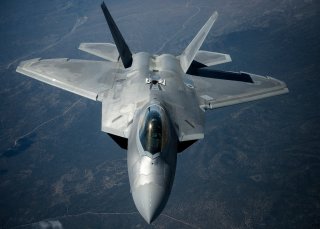 Despite the F-22 Raptor’s reputation as the world’s most capable air superiority fighter, the stealth jet has lost a number of notional dogfights over the years to older and less advanced platforms like the F-16 and even the Navy’s electronic-warfare specialist, the EA-18G Growler. But few exercises have done more damage to the mighty Raptor’s reputation than a series of training dogfights with German Eurofighter Typhoons that took place just about a decade ago.

These losses may have been notional, but some people clearly took them seriously. So seriously, in fact, that German Eurofighters were spotted wearing F-22 kill markings on their fuselages after telling the press that they had “Raptor salad for lunch.”

With the Air Force’s Next Generation Air Dominance fighter cruising toward service in the coming decade, it now seems likely that the mighty Raptor will retire without ever firing a shot at another aircraft in anger, making these simulated combat exercises and a handful of exciting intercepts the extent of the Raptor’s air-to-air legacy.

So what is that legacy exactly? Is the F-22 truly as dominant as people believe? Or is this fighter’s biggest advantage not stealth… but hype?

Where it all started…

Arguments about the F-22 and Eurofighter Typhoon largely stem from German Eurofighters’ participation in the Air Force’s large-scale Red Flag air combat exercises over Alaska in 2012.

Red Flag is an advanced aerial combat training course that pits a wide variety of aircraft, often from multiple nations, against large-scale and realistic threats meant to simulate a real near-peer fight.

That year, Germany sent 150 Airmen and eight Eurofighter Typhoons from JG 74, or the Luftwaffe’s 74th Tactical Air Force Wing, to Eielson AFB in Alaska to participate in a wide variety of missions over two weeks. Included among them was a series of close-range Basic Fighter Maneuver (BFM) drills with America’s Raptors. BFM, of course, is fighter-pilot parlance for dog fights.

After the exercises were over, Germany’s Eurofighter pilots arrived at 2012’s Farnborough International Air Show, where they were quick to discuss their victories over the F-22. According to David Cenciotti’s coverage for The Aviationist, Germany’s Typhoon pilots explained that when the F-22 was flying with external fuel tanks attached and fighting within-visual range, Typhoons were often able to outclass the Raptor.

How does the Eurofighter Typhoon compare to the F-22 Raptor?

Despite their generational differences, the F-22 Raptor and Eurofighter Typhoon actually have a number of things in common. They were both originally designed to serve as air superiority fighters born out of the Cold War, with the Typhoon first taking to the skies in 1994 and the F-22 following behind in 1997. Likewise, both fighters ultimately entered service in the early-to-mid 2000s, with the Typhoon entering active duty in 2003 and the Raptor, once again, following behind in 2005.

But despite these aircraft being designed at around the same time to serve in similar capacities, they differ dramatically in how they go about accomplishing their mission.

The F-22 Raptor was always meant to be a revolution in airpower, leaning heavily into America’s groundbreaking stealth technology to produce what was—and remains—the stealthiest operational fighter on the face of the planet. But it’s not just stealth that makes the Raptor a capable platform. It also boasts a high degree of sensor fusion and advanced avionics that allow for an extreme degree of situational awareness while reducing cognitive load for the pilot. In other words, the F-22’s onboard computers allow the pilot to devote more attention to the fight and less to operating the aircraft.

But the F-22 isn’t all about stealth and sensor fusion. It also incorporates elements of what might be considered 4th-generation dogfighting design: like thrust vector control — or the ability to orient its jet nozzles independent of the airframe to perform incredibly aerobatic maneuvers, a high thrust-to-weight ratio, and an M61A2 20mm Gatling gun that can fire its onboard 480 rounds at a blistering rate of 6,000 per minute.

“Raptor has vector thrust: Typhoon doesn’t,” RAF Typhoon pilot and squadron commander Rich Wells told Breaking Defense in 2013. “What the aircraft can do, it’s incredible. The Typhoon just doesn’t do that.”

And while it usually carries a total of eight weapons internally (six AMRAAMs and two AIM-9 Sidewinders), it can be fitted with four external pylon stations for additional munitions when it’s tired of speaking softly and decides to become its own big stick.

As a result, the F-22 bridges two combat philosophies — offering such a high degree of stealth and situational awareness that it can win most fights before the opponent even knows that it’s there, alongside a highly respectable slew of traditional dogfighting traits that allow it to stand and swing with the most dynamic hotrod dogfighters of the previous generation.

The Eurofighter Typhoon, on the other hand, wasn’t aiming to reinvent the existing air superiority model, so much as to perfect it as it was. Its delta-wing design, a shape nearly adopted by the F-22’s defunct bomber sibling, offers a high degree of subsonic maneuverability alongside increased lift and range. The design, as well as the materials that make up the Typhoon, all lend it a higher degree of stealth than you might find in most comparably advanced 4th-generation fighters.

In fact, according to Eurofighter promotional materials:

The aircraft is built with advanced composite materials to deliver a low radar profile and strong airframe. Only 15% of the aircraft’s surface is metal, delivering stealth operation and protection from radar-based systems

Like many other fighters, including the F-22, the Typhoon also leverages electronic warfare capabilities to obscure its radar return. And unlike the maintenance-heavy Raptor, the Typhoon was designed to be easy to maintain, assembled out of 15 interchangeable modules to minimize repair time. When up close and personal, the Typhoon’s Mauser BK27mm gun fires at either 1,000 or 1,700 rounds per minute, with 150 rounds carried onboard.

Since entering service, the Typhoon has matured into an extremely capable multi-role platform, leaving its air superiority roots behind to become one of the most well-rounded fighters in service today, leveraging its 13 hard points for a wide variety of mission sets.

“The Eurofighter is certainly, as far as smoothness of controls and the ability to pull (and sustain high G forces), very impressive,” explained Gen. John P. Jumper, former Air Force Chief of Staff and among the few pilots to have seat time in both the Raptor and Typhoon. “That is what it was designed to do, especially the version I flew, with the avionics, the color moving map displays, etc. — all absolutely top notch. The maneuverability of the airplane in close-in combat was also very impressive.”

The Typhoons pair of Eurojet EJ200 afterburning turbofan engines aren’t quite as powerful as the Raptor’s, propelling the Eurofighter to a top speed of Mach 2, vice the Raptors 2.25 — but top speed doesn’t mean much in a fight, and the Eurofighter’s comparatively lower weight allows for a better thrust-to-weight ratio for the Typhoon (in its interceptor configuration) than a similarly equipped Raptor.

F-22 vs. Eurofighter Typhoon: What do we know about the exercises?

Although many details remain murky, there are some things we know for sure about these 2012 dogfight exercises. Based on pilot statements, we know that at least some (if not all) of them were one-on-one engagements. Most importantly, they occurred within visual range with a number of reports stating that the Raptor was carrying stealth (and aerobatics) hindering external fuel tanks.

This distinction is essential because it means the fighting began under a forced pretense that effectively neutered the Raptor’s greatest strength: its ability to use stealth and situational awareness to dictate how an engagement begins and, if the reports of fuel tanks are true, its aerobatic maneuverability.

In real life, F-22 pilots would almost certainly be aware of the Typhoon before the Typhoon was aware of it, allowing the Raptor to put itself into an advantageous position before the fighting began (or simply taking out the Typhoon from beyond visual range). And it practically goes without saying that no pilot would dogfight for their lives with external fuel tanks still hanging from their wings.

This type of exercise is common in military training, however, and could be compared to offensive and defensive positions in scholastic wrestling. A neutral start in wrestling begins with both athletes on their feet — this would be like two fighters flying into an exercise in the same way they might in real life.

Starting in a defensive (or disadvantaged) position, on the other hand, is when one wrestler begins the period on their hands and knees, with their opponent next to them on one knee with an arm over their back (the advantage). In the case of these specific exercises, the F-22 played the role of the disadvantaged wrestler starting from its knees — playing to the Eurofighter’s strengths, rather than its own.