Can Europe Save Its Tourism Industry From the Coronavirus? European governments are looking for ways to aid their struggling travel and hospitality sectors as slower-than-expected vaccination campaigns and lingering lockdown measures exacerbate the already deep losses they’ve suffered amid the ongoing COVID-19 pandemic. Efforts to establish health certificates are unlikely to be sufficient in helping the industries, which will likely require additional state support in the coming months. European countries began their vaccination campaigns between late December and early January. But in continental Europe, logistical issues connected to the production and distribution of vaccines have impeded inoculation efforts. This creates problems for the recovery of Europe’s travel and hospitality sectors, which are particularly important revenue-generators in the south. In recent weeks, several southern European governments have expressed interest in issuing so-called “health passports” that would allow people who have been vaccinated against COVID-19 to travel abroad, among other activities. The European Union also discussed issuing a continental “health passport” in late January, though no decision was made. 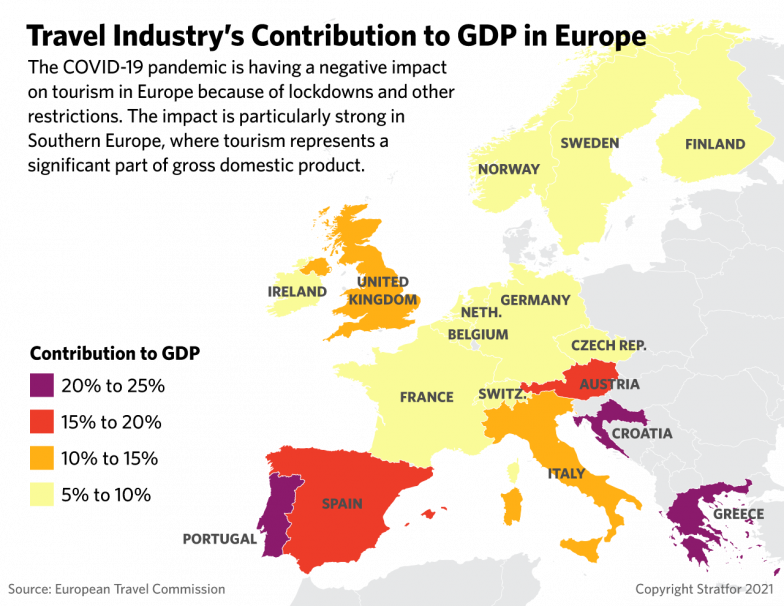 European countries hope to ease most travel restrictions before Easter in late March and early April, but this is likely too optimistic considering the slow pace of vaccinations. The pandemic’s impact on jobs and household savings will also hurt the travel and hospitality sectors, as many will have less disposable income to travel. European governments reintroduced lockdown measures in November and December in response to an increasing number of COVID-19 infections. Most of these governments have recently extended these measures, which in many cases will continue at least until mid-March. This will continue to have a negative impact on domestic and international mobility that will further weaken the tourism and hospitality sector. Prolonged lockdown measures will also prevent the creation of new jobs, especially in service-related activities, and reduce households’ disposable income to spend on leisure activities or travel. Uncertainty about the future of travel restrictions is also likely to result in some people delaying their travel-related decisions.

Amid prolonged lockdowns, tourism and hospitality companies in Europe will likely freeze hiring plans and need additional state support in the coming months. This will be particularly damaging for southern European countries, where tourism is a significant source of economic activity and employment. According to the United Nations World Tourism Organization (UNWTO), tourism in Europe declined by 70% in 2020 compared to 2019. In mid-2020, the European Union approved a 750 billion euro recovery fund composed of grants and loans for member states. National governments are currently submitting their spending proposals to the European Commission. In late January, EU Commissioner for Jobs and Social Rights Nicolas Schmit said that countries’ hospitality sectors should be at the core of these spending plans. Associations representing small- and medium-sized enterprises (SMEs) in the tourism and hospitality sectors across Europe have warned that the economic crisis and the uneven access to state help could lead to a consolidation of the sector, with SMEs being absorbed or even eliminated by their larger competitors — raising the risk for additional rounds of layoffs. This will contribute to slower economic recoveries in southern Europe, where countries are highly dependent on tourism for employment and revenue, compared with the stronger and more diversified economies in the north.

The EU Vaccine Crisis: What’s Being Done to Speed Up Production?