Can the FCC Really Regulate the Internet? 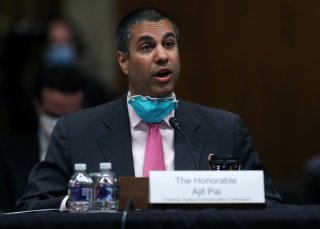 These events raise the question of whether the FCC can reinterpret Section 230. The answer is yes — though perhaps not in the way President Trump wants. And contrary to Pai’s statement, binding rules may not be the FCC chairman’s ultimate goal.

As we’ve discussed before, Section 230 is the backbone of American internet law. The statute gives platforms such as Twitter broad immunity from liability for content posted by their users. It also gives these platforms protection for decisions to delete content they find problematic.

Earlier this year, the National Telecommunications and Information Administration (NTIA), on behalf of the White House, requested that the FCC clarify the meaning of Section 230. Through these reforms, President Trump sought to curb the arguably disproportionate censorship of right-of-center views. Whether systemic anti-conservative bias exists isn’t clear, but Twitter did itself no favors last week by suppressing an explosive New York Post article about Hunter Biden — supposedly pursuant to an anti-hacking policy that the company since disavowed as inapplicable. The next day, FCC General Counsel Tom Johnson concluded that the FCC has legal authority to interpret Section 230, after which Pai announced his intent to “move forward with a rulemaking to clarify its meaning.”

Can the FCC regulate the internet?

Though perhaps surprising to non-telecom types, Johnson is correct that the agency has authority to interpret Section 230. In AT&T v. Iowa Utilities Board, the Supreme Court held that Section 201(b) gives the FCC broad rulemaking authority to implement the Communications Act of 1934. Like the provisions in that case, Section 230 was passed as part of an amendment to the 1934 act, meaning that the FCC may interpret its provisions despite not being mentioned explicitly.

But what can the FCC do?

It’s unclear how far this takes the agency; much will depend on what the FCC does with this jurisdiction. Because this is a rulemaking, “Chevron deference” likely applies: If the statute is ambiguous, courts must uphold the agency’s reasonable interpretation. But an interpretation may be unreasonable if it cuts against the statute’s plain language. And this is a risk for many of NTIA’s proposed “clarifications.” Section 230 shields internet companies from liability. NTIA’s proposal would turn that shield into a sword to regulate the very services the statute seeks to protect — despite the statute’s statement that “It is the policy of the United States . . . to preserve the vibrant and competitive free market that presently exists for the Internet . . . unfettered by Federal or State regulation.” (Emphasis added.) It stretches the statute beyond the breaking point to transform Section 230’s conferral of legal rights into regulations mandating legal duties.

But a more moderate approach may fare better. Notably, Pai echoed Justice Thomas’s critique that courts have interpreted the statute more broadly than the text suggests. If the FCC limits its rulemaking to these interpretive questions, clarifying how the statute defines “publisher” or when content is “created or developed” by another, it may survive judicial review (though it would have to explain why its newfound Section 230 authority is not arbitrary and capricious in light of its earlier interpretation). But if it imposes fairness doctrine-like obligations as a condition of statutory immunity as NTIA suggests, courts may find this threatens platforms’ First Amendment rights of editorial control in ways that offend the unconstitutional conditions doctrine. (At a minimum, the canon of constitutional avoidance would allow courts to avoid the agency’s interpretation if it suggests a constitutional concern.) Regulating speech within constitutional constraints is hard, which is why the FCC fares worse than most other agencies on judicial review.

Of course, binding rules may not be Pai’s goal. The context is important: His threat comes after a summer of conservative complaints and immediately following Twitter’s ham-handed effort to squash a potential October surprise. As guardian of the nation’s communications networks, the FCC may simply be saber-rattling to cajole platforms into good behavior during the next month until the election, when concerns about private censorship are most acute. The FCC has a long history of this “regulation by raised eyebrow,” nudging companies in a preferred direction by threat of future action.

But the agency should be wary of the scaffolding that it is erecting for greater regulation of the internet ecosystem. As critics said of Obama’s “pen and phone” approach to administrative action, the FCC could be leaving a loaded gun for a future administration to use.

This article was first published by the American Enterprise Institute