Can Political Violence Ever Be Justified? 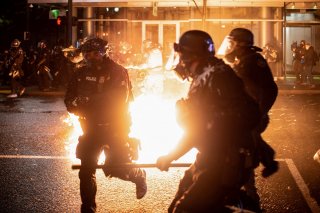 The summer of 2020 was indelibly marked by political violence on the streets of many American cities. Exacerbated by the COVID-19 pandemic and inflammatory messages from President Donald Trump such as his dismissal of systemic racism in the US, protesters against racial injustice clashed with police, unidentified paramilitaries and armed vigilantes.

Most recently this occurred in Louisville, Kentucky, where more than 100 days after the shooting of Breonna Taylor in her own apartment, one of the police officers involved was charged with wanton endangerment for firing shots that went into a neighbouring apartment. Or to put it another way, police officers killed an unarmed black woman and one of them has been charged for the shots that missed.

This decision caused days of unrest, during which two police officers were shot. In response Andy Beshear, the governor of Kentucky, called for peace because: “We know the answer to violence is never violence.”

The protests are unprecedented in recent American history and have prompted fears about the growth of political violence in democratic politics.

Such escalations evoke a long-standing criticism about the “right of resistance”, which can include the use of violence to oppose injustice. The English philosopher Jeremy Bentham argued that such a right would destroy the very stability of society that makes the enjoyment of individual rights possible.

If a person could rightfully resist the agents of the law when they simply believe themselves to be oppressed, then the law ceases to exist. Bentham conjured up a world where conscription officers are shot, leaders of press gangs are thrown into the sea and judges set upon by dagger-wielding convicts. It would send society back to the state of nature described by the philosopher Thomas Hobbes in his book Leviathan – a war of all against all.

But as I argued in my recent book Global Poverty, Injustice, and Resistance, this Benthamite angst, and the Hobbesian hobgoblins it conjures, relies upon a caricature of the right of resistance.

Violence is never a trivial choice

Supporters of justifiable resistance have never characterised it as an easy choice for someone to make. The English philosopher John Locke, who influenced the drafters of the American Declaration of Independence, referenced a “long train of abuses” and the absence of remedies to these abuses as pre-conditions for resistance. The bar is always set high, because resistance carries tremendous risks. You can be arrested, imprisoned, or killed for engaging in acts of resistance – especially violent resistance. It is not a trivial choice to challenge an oppressive state.

Denying the right to resistance poses a far greater threat to a decent society than embracing it. It would mean that people would be expected to passively endure the most extreme injustice. Slavery, genocide, apartheid – all of these would have to be tolerated by bystanders and endured by victims. To deny the right to resistance collapses the very notion that we have rights at all, because they would ultimately rest on the discretion of those with power.

But political violence is the sort of thing that democracy is supposed to prevent. Some have argued that democracy transforms, as if by alchemy, the irreconcilable antagonism between enemies into the civilised disagreement of rivals. This makes a presumptive norm against violence an intrinsic part of any democratic society – but that’s not the same as absolute prohibition.

We cannot be naive about democracy. The idea that political violence has no place in democratic politics relies on the assumption that democratic states are incapable of severe injustice. This is accompanied by a dogmatic belief that severe injustices – if they do occur – will be remedied by the exercise of voting, the protection of individual rights by the court, or, at the extreme, civil disobedience.

This faith is misplaced and obviously so. Just look at racism in the US – it persists despite emancipation, despite the civil rights movement, and despite the election of Barack Obama. The protests in 2020 have been about the structural injustice that black Americans face on a daily basis. Racism is a persistent and severe injustice that has yet to be resolved by democratic processes.

The veneration of non-violence does not engage with the deeply entwined relationship between peaceful resistance and armed struggle especially among black people in the Americas. It excludes the contribution made by people from Toussaint Louverture, the leader of the Haitian Revolution in 18th century, to the Black Panthers movement in the 1960s, and you cannot tell the real story of emancipation with them.

This is not a call to romanticise political violence. Far from it. Violence is the last resort of desperate people and it is often less effective than non-violent alternatives. But it cannot be dismissed out of hand or erased from history because it makes us uncomfortable.

To those who argue that this reasoning also justifies violence from the police and paramilitaries, that position does not stand up to scrutiny. In the first place, it pretends that violence has not been unleashed already. The overwhelming majority of protests in the US have been peaceful but things often turn ugly when the police and their paramilitary supporters arrive.

Racism is a severe and intransigent injustice in the US – you cannot compare those fighting against it with those fighting to maintain it. You cannot wash your hands and say both sides are equally bad. This exposes how disingenuous arguments in favour of law and order really are: they favour the status quo of white supremacy.

Chastising those protesting, while enjoying the advantages of unjust social institutions, is a refined form of hypocrisy available to only to those complicit with oppression.