Can Russia Turn the Tide for Syria in the War? 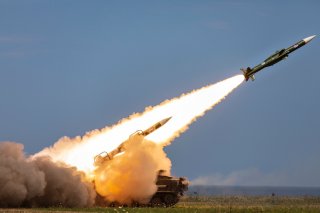 Here's What You Need to Remember: The flexibility to act as either a point defense or middle-ranged SAM might also make the S-350 attractive to export customers, who might want more capability than what the Pantsir brings, while also retaining good point defense capabilities.

On February 26, 2020 Russian’s VKS took their first delivery of the new S-350 “Vityaz” surface-to-air missile (SAM) system. The S-350 has received increasingly intense media coverage through 2019 as it came closer to entering service. The majority of this has focused on the S-350s anti-cruise missile capability. However, the S-350’s adoption has interesting implications for the role of the S-400 in Russian air defense.

The primary missile that the S-350 will fire is the 9M96, or variants thereof. The same missile can also be installed on S-400 launchers, as can be seen on a globalsecurity.org page. 9M96s are used for self-defense of S-400 launchers and close protection of targets near the S-400 launcher, forming a medium-range layer over the short-range and point-defense layer of Pantsir and Tor systems.

But the integration of the 9M96 missiles on the S-400 is not ideal, as the disparity of ranges between the larger 40N6 missiles and the 9M96 may force the S-400 launcher units to be positioned closer to the front line than necessary. Thus, the S-350 makes sense as it allows the 9M96s to be separated out from the S-400s, and the S-400s relegated to solely the longer range role.

The S-350 also will be armed with the short-range infrared 9M100 missile. This missile is very short ranged and will probably be used for self-defense of the S-350 launcher, being even shorter ranged than the 57E6 missiles mounted on the Pantsir short-range air defense system. However, despite it’s nominally medium-ranged role, the S-350 has the potential to surpass the Pantsir. While reports are controversial, the Pantsir’s deployment in Syria is generally held to be not that successful, with units of both the S1 and S2 variety being destroyed in Israeli saturation attacks.

The S-350 has the potential to hold up to four-times the ammunition load of the Pantsir, as it has twelve tubes. If the larger 9M96 missiles are used, this gives it an equivalent missile load to the Pantsir, albeit with longer ranged and more powerful missiles. But presumably, the 9M100 missile could be dual-packed or quad-packed in the 9M96 tubes, allowing for a single S-350 launcher to carry from twenty-four to forty-eight missiles.

The flexibility to act as either a point defense or middle-ranged SAM might also make the S-350 attractive to export customers, who might want more capability than what the Pantsir brings, while also retaining good point defense capabilities. A joint S-400/S-350 air defense network would be very hard to bring down. While marketed as a “cruise-missile killer,” the S-350 is really much much more. It’s a medium-range SAM on a similar level to the Buk M3 and could be an effective point-defense system as well.