Can Schools Afford to Go Forward With NCAA Football? Can They Afford Not to? 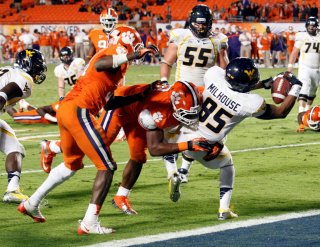 The NCAA men’s and women’s basketball tournaments were canceled back in the spring. In early August, smaller conferences like the Mid-American Conference and the Mountain West Conference postponed all fall sports, including football.

But the big news came when the Big 10 and PAC 12 postponed all fall 2020 sports until the spring. These comprise two of the Power Five conferences, which control the college football playoffs and earn the lion’s share of revenue from the sport. The other Power Five conferences – the SEC, ACC and Big 12 – are holding out hope that they can still play football in the fall.

The schools weighing whether to postpone are taking into account the health of staff and student athletes. But top of mind has to also be the financial implications of canceling a season, with Power Five conference schools facing the biggest repercussions.

Since many Power Five athletic programs are funded by football and basketball revenue, not having a football season would be a huge financial setback.

According to Patrick Rishe, director of the Sports Business Program at Washington University in St. Louis, each Power Five school would see an average loss of at least US$62 million in football revenue. This money is primarily generated from existing television contracts and sponsorships, in addition to football ticket sales. So even a season with empty or partially filled stadiums can earn a school a big paycheck.

On average, Power Five athletic departments – many with $100 million-plus budgets – make nearly half of their total operating revenue from football, with some schools deriving over 80% of department revenue from the sport. Typically this revenue funds the bulk of department operations including other sports programs and, in rare cases, even provides additional revenue to the academic side of the university.

The amount of money at stake explains why some Power Five conferences are desperately trying to figure out a way to make the season work. Before the PAC 12 and Big 10 bowed out, all the schools had altered their football schedules so that they would primarily play only conference games, similar to the amended Major League Baseball schedule. The idea was to reduce travel – and potential exposure to COVID-19 – while still being able to have a season.

Not all funding models are the same

Where does the elimination of non-conference games among Power Five schools leave smaller schools? Is there a financial ripple effect?

Every year, mid-major programs – like those in the Group of Five conferences – play what are called “money games.” In exchange for a large paycheck that sometimes exceeds $1 million, these schools will play a game against a Power Five school. Although there’s the occasional upset of a Power Five team by a smaller school, these games are usually lopsided and only serve the purpose of earning extra money for the smaller school.

When several Group of Five conferences postponed fall sports, some in the media wondered whether it was motivated by finances, arguing that the schools couldn’t afford to play a season without these guaranteed, non-conference money games.

While this money can certainly buttress an athletic department’s budget, it doesn’t mean that without them, a Group of Five program would cease to exist. Overall revenue from these games rarely exceeds 5% of the overall athletic budget of any Group of Five school. So the budget impact of money games is overstated.

We can see this in a database provided by The Knight Commission on Intercollegiate Athletics that breaks down the college athletic budgets at all NCAA Division I schools. Most Group of Five conference schools are subsidized somewhere between 60% and 90% from institutional support and student fees.

Using the Mid-American Conference as an example, the database shows for all schools in the conference that football games only represent 5% of overall athletic revenue. In the 2018-2019 season, no school derived more than 8% of its yearly take from these games, while for one school, The University of Toledo, it only amounted to 2%.

In other words, these departments don’t need football to compete financially. While revenue loss can hurt, better budgeting can mitigate any shortfall.

So for many big conference schools, the cancellation of a football season can decimate an athletic department’s budget, dragging down other sports in its wake. But for smaller conferences, student fees, not football, foot the bill – with enrollment drops presenting the real financial threat to athletic budgets.