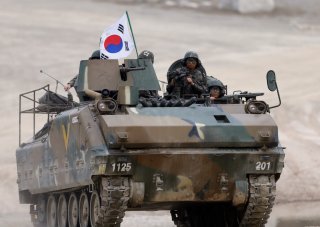 Here's What You Need To Remember: The K808 and K806 bridge the gap between larger tracked armored fighting vehicles, and smaller and older 4x4 armored personnel carriers.

Despite the differences, what they have in common is that they’ll both pack a big punch, and fill an important niche within the Republic of Korea Armed Forces.

The South Korean industrial company Hyundai Rotem announced that they’ll soon begin building more of their K806 and K808 wheeled armored combat vehicles for the Republic of Korea Army (RoKA). Jane’s reported that the delivery would be worth nearly $350 million.

The two platforms are intended to replace South Korea’s K200A1, a tracked armored personnel carrier which is itself closely related to the American M113 APC, and share several common characteristics. As their names suggest, the K806 is a six-wheeled vehicle, whereas the K808 is an eight-wheeled platform.

The larger K808 has a steely-sloped front glacis, which affords the vehicle slightly better protection when compared to a flat hull, and aids in amphibious operations. To that end, the K808 has two water jets at the rear that allow the K808 to swim.

The K808’s main armament is either a K4 grenade launcher, an indigenously-built Mk 19 grenade launcher copy, or a K6, a South Korean .50 caliber Browning machine gun copy. There are a variety of alternative main gun arrangements, however, including remotely operated or manned stations, as well as an optional turret that houses a large thirty-millimeter main gun.

In its base configuration, the K808 protects its two-man crew from small arms fire and artillery shell splinters and can be equipped with additional armor protection. It is more heavily protected than the K806, though both have nuclear, biological, and chemical weapons protection.

The smaller K806 is intended for land-only operations and, because it lacks the pair of rear-mounted water jets, is not amphibious. It is more lightly armed and armored, sporting a single 7.62mm machine gun. Though the platform is in theory able to be equipped with a remotely operated weapon station, company material shows the K806 with a manned weapon station.

Troops onboard can egress both vehicles from either a rear-facing ramp or via the four top hatches. Though both the K808 and K806 are powered by a 420 horsepower diesel engine, the K806’s offload performance is expected to be better due to that vehicle’s lighter 16-ton weight compared to the K808’s 20-ton footprint.

South Korea fields a variety of American, Soviet, West German, and indigenously-designed vehicles, and the K808 and K806 bridge the gap between larger tracked armored fighting vehicles, and smaller and older 4x4 armored personnel carriers that would struggle to survive in highly contested, high-intensity environments.