Can Surface Naval Ships Survive an Onslaught of Undersea Threats? 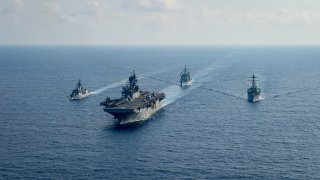 Here’s What You Need to Remember:  Asking the RAN to fight with great kit but a shallow magazine isn’t a great idea. Sailors will pay in blood and taxpayers will pay by the billion. Failure is not an option.

This article focuses on the missile threat, which is a serious concern, particularly given that terrorist groups have been known to use sophisticated anti-ship cruise missiles against warships.

The Royal Australian Navy’s future surface combatant fleet will be composed of Hobart-class destroyers and Hunter-class frigates. The principal armament is the Mk-41 vertical launch system (VLS): Hobarts have 48 cells and Hunters will have 32 cells. Each cell carries one long-range weapon or four shorter-range weapons—see table below. The secondary armament is the Mk-15 Phalanx gatling gun with an effective range of around 1.6 kilometres: Hobarts have one and Hunters will have two. This system is designed to ‘kill’ any missiles that leak through the ships’ air-defence umbrella.

The problem is that Hobarts and Hunters have relatively small VLS magazines, and once they’re depleted the ships will be vulnerable to follow-on enemy attacks. At best, a full Hobart magazine of 48 SM-6s would be depleted after 48 hostile missiles, but more likely after 24 intercepts due to enemy decoys and countermeasures such as chaff or flares. To make matters worse, VLS magazines can’t be reloaded at sea, unless the RAN wants to sacrifice already scarce VLS cells for a strikedown crane.

It’s also doubtful that ballistic and hypersonic missiles could be effectively countered by Phalanx, owing to its limited effective engagement range versus terminal missile speeds. Even a successful intercept by Phalanx would risk hypersonic or very high supersonic debris crippling the ship.

The traditional answer is to buy new ships or redesign existing ones. Buying new ships, such as a second batch of Hobarts, would be expensive, and it would be at least five years before new ships start rolling off the production line.

Redesigning the Hobarts and Hunters might be possible, but would depend on the availability of growth margins for space, weight, buoyancy, balance, power and cooling. If the ship has no remaining growth margins then it gets complex: if something goes on, something must come off. Even when growth margins are available, modifications can still take years and cost hundreds of millions—for example, deleting bulkheads, moving firefighting systems and redirecting cooling conduits. Some reports put Hobart growth margins at 600 tonnes and describe the Hunters’ growth margins as rapidly ‘vanishing’.

So how can the RAN improve its surface combatants’ survivability against missile threats?

In the short term, Hobarts and Hunters could have their self-defence systems upgraded to free up scarce VLS magazines for other roles, such as ballistic missile defence and land attack.

The RIM-116 missile is a defensive interceptor missile with a speed exceeding Mach 2 plus an effective range of between 7 and 9 kilometres. The RIM-116 defeats cruise missiles plus small boats and aircraft; the RIM-116 Block II has been modified to ‘defeat newer classes’ of anti-ship cruise missiles. It’s also possible that the classified features of the RIM-116 might allow it to engage some types of hypersonic threats.

If Hobarts and Hunters were fitted with four Mk-49 launchers, each ship would have an additional 84 shots of RIM-116 for air and missile defence. It might also be possible to reload SeaRAM or Mk-49 launchers at sea because the RIM-116 Block II appears to be relatively portable, at 15.87 centimetres in diameter by 2.88 metres long and weighing 88.2 kilograms.

With 84 shots of RIM-116, the Hobart VLS could carry eight Tomahawks, eight LRASMs and 32 SM-6s for air and terminal ballistic missile defence. The entire Hunter VLS could carry 128 shots of ESSM, and in this scenario would provide escort protection for Hobarts.

In the medium term, Defence could investigate other survivability enhancements, such as DARPA’s new MAD-FIRES naval round for countering swarms of enemy missiles, aircraft and boats. MAD-FIRES is compatible with the BAE Systems 57-millimetre naval gun that requires ‘minimal deck penetration’ for installation, making it easier to retrofit.

In the long term, Defence could liaise with BAE Systems to ensure that the second batch of Hunters has significant growth margins baked in—for example, the ability to install additional strike-length VLS in the multi-mission bay. They could also be redesigned to incorporate extra space, balance, power and cooling growth margins to support future high-energy lasers and railguns.

Ultimately, the Hobarts are and the Hunters will be fabulous surface combatants but appear to lack sufficiently deep magazines.

Specialists in the Defence Science and Technology Group could argue that expensive ordnance is not the way for surface combatants to survive in future wars against first-rate adversaries, and they could be right.

Remember, DST Group will have a close eye on future technologies that could significantly change the game, just like the P-51 Mustang that increased the survivability of US bomber crews in World War II. For all we know, they could be working on highly classified ‘special access programs’ to develop technologies that will revolutionise the survivability of surface combatants.

However, the future is a blank cheque of time, not the ‘decade of concern’ between 2020 and 2030 when there is the real possibility of a regional war.

While we wait for game-changers that DST Group might be cooking up, something must be done to rapidly improve the survivability of RAN surface combatants.

Asking the RAN to fight with great kit but a shallow magazine isn’t a great idea. Sailors will pay in blood and taxpayers will pay by the billion. Failure is not an option.