Can Taiwan Count On America If China's Massive Military Invades? 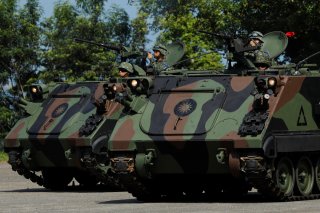 Here's What You Need To Remember: Despite a recent spike in tensions, China-Taiwan relations are still massively improved, exchanging university students and business investments rather than artillery shells and aerial bombs. However, the capabilities of the PLA have drastically increased in the interval as well.

In the event of military conflict, most believe China would use the modern equivalent of the tactics used at Yijiangshan: a massive bombardment by long-range missile batteries and airpower well before any PLA troops hit the shore. We should all hope that scenario remains strictly theoretical.

Sébastien Roblin holds a master’s degree in conflict resolution from Georgetown University and served as a university instructor for the Peace Corps in China. He has also worked in education, editing and refugee resettlement in France and the United States. He currently writes on security and military history for War Is Boring. (This first appeared in 2017.)