Can the UK Translate its Science Superpower Aspirations into Economic Wellbeing? 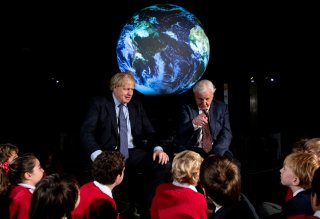 What will be Britain’s place in the world after Brexit? Since the publication of the UK government’s research and development (R&D) roadmap, one part of Prime Minister Boris Johnson’s answer to this question has become far clearer: the future of the UK is, apparently, as a “science superpower”.

At first glance – especially when compared to other, more ideologically charged visions of the new, global Britain – there’s little to dislike about the idea of the UK as a science superpower, with its futuristic connotations and an implied promise of a high-tech, high-skills economy.

For all this intrinsic appeal, however, it’s far less clear at this stage what becoming a science superpower might look like in practice, or just how big a departure from business as usual it might entail. The government has committed to increasing public spending on R&D to 2.4% of GDP, pledged to relax visa rules for foreign scientists and allocated £800 million a year for a new high-risk, high-reward research institute. But other than that, it remains to be seen exactly what it is planning on doing differently.

Beyond expansion of funding, the temptation may well be not to shake things up too much. On some of the biggest metrics, UK science already punches well above its weight. In 2019, Britain accounted for 14% of the world’s top-cited publications and was ranked the eighth most innovative economy in the world.

If being a science superpower is simply a matter of doing better on these kinds of metrics, we might reasonably conclude that it’s best simply to throw more money into the current system – rather than trying to fix something that clearly isn’t broken.

The case for change becomes far stronger, however, when you take a broader view of what it is to be a successful, science-led economy. For all the pride placed in it, the UK’s scientific prowess doesn’t seem to be translating into broadly shared economic wellbeing.

The British economy before COVID-19 was not one that worked for most people. It was characterised by relatively low and stagnant productivity, median wages that were lower than before the 2008 financial crisis and some of the highest levels of economic inequality in the developed world.

Science and high-tech innovation have led to success for small sections of the population in places like London, Oxford and Cambridge. But impressive figures and occasional dramatic breakthroughs – like graphene and progress on COVID-19 vaccines – have tended to obscure a broader failure to deliver economic and social value for most of the country, most of the time.

In the context of strained public finances, the expensive task of cementing the UK’s status as a science superpower will need to have transformative benefits that stretch much farther than a few top universities and companies.

First up, government needs to ensure that the economic benefits of UK science and innovation are far more widely shared geographically. One significant step would be to devolve a substantial proportion of the extra public money earmarked for R&D to the regions, towns and cities of the UK.

Devolution of a sufficient scale could start to counterbalance the inequality-driving tendency of our current system to direct research money towards regions that already perform well on innovation. There is also some evidence that targeted R&D spending acts as a powerful spur to regional development.

In addition, there needs to be more attention paid to the slow rate at which technologies developed by UK scientists and innovators make their way to the wider economy – when they do so at all. As well as greater investment in “translational” research (focused on finding applications for scientific advances), more need to be done to address UK businesses’ reluctance to invest in new technologies and processes.

Here, the government could make far greater use of mechanisms to bring researchers and innovators together with sector leaders to develop technologies in ways that add value to their businesses and organisations. This is especially needed in valuable but struggling sectors like care, hospitality and retail.

Secondly, the UK needs to become far less agnostic about the direction that innovation and scientific research takes, abandoning the long-held assumption that new technologies automatically deliver public benefit in the long run. This means a more serious commitment to direct funding towards socially important challenges like decarbonisation and the ageing population.

Regulation will also need to take far greater account of the ethical ramifications of emerging technologies. It should be used far more proactively, engaging with innovators early on and developing frameworks that guide new technologies to take more benign forms and businesses models.

Finally, a revaluation of the expectations and incentives that drive UK (and world) science is overdue. Prime candidates for reform here are the patent system, which though intended as a way to reward invention, has over decades taken a form that enables monopolisation and rent seeking. In lieu of changes to the patent system itself, patent buyouts, whereby the government buys a patent from its owners and makes it available to all, could help democratise innovation in some important areas.

And while it’s perhaps too much to hope that UK science would willingly part with a system at which it does so well, it is also worth considering the consequences of using citations as the chief measure of academic success. This has arguably encouraged incremental, risk-averse research, at the expense of riskier, more novel (but also more transformative) projects.

UK science is an enormous asset, but its potential is wasted as long as it remains disconnected from the wider economy, and insufficiently directed towards problems that matter to most people. Until this changes, it’s hard to see why we should care about whether or not the UK can call itself a science superpower.