Can the UK Vaccinate 15 Million People by Mid-February? 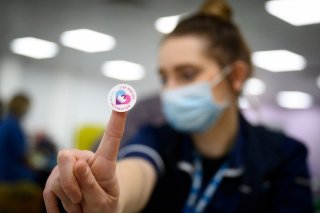 The pandemic is the UK’s worst ever health crisis and, tragically, its’s been getting worse and worse. A more infectious variant of the coronavirus together with insufficient restrictions in December 2020 have sent COVID-19 cases soaring. The National Health Service is teetering on the brink, with hospitals close to capacity, and daily deaths are now in the thousands, surpassing April 2020’s peak. The UK continues to have one of the worst COVID-19 death rates in the world.

However, Britain has a solution in hand, having authorised three COVID-19 vaccines for use. It’s started rolling out two (those developed by Pfizer/BioNTech and Oxford/AstraZeneca) and has delivered the first dose to more than 2.4 million people – well ahead of most other countries.

This is thanks in no small part to the UK’s powerful research base. The Oxford/AstraZeneca vaccine – which will be the one used predominantly in the UK – was developed in record time. The UK’s expertise in genomic sequencing also allowed it to identify the problematic new variant early enough to be able to respond to it. Subsequent control measures clearly haven’t worked, leaving the country in a race to get vaccines to the most vulnerable ahead of the virus, but without forewarning from sequencing, there might not even have been a race.

A clear target has been set. Britain is aiming to give a first vaccine dose to all over-70s, care home residents and staff, health workers and people shielding – around 15 million people – by mid-February. The government says it is on track, but with over 2 million people needing to be vaccinated each week, the rate of delivery needs to increase significantly. Over the coming months, this series of weekly vaccine roundups from The Conversation will keep you up to date with how this race between vaccine and virus is progressing. We’ll also present to you any other key developments surrounding COVID-19 vaccines.

One way the UK is speeding up getting first doses to people is by delaying giving the second, top-up dose. In trials, second doses typically followed three or four weeks after the first; instead, Britons will receive their second dose after 12 weeks. Researchers and manufacturers are split over the idea: Pfizer doesn’t support it, but AstraZeneca says spacing out doses of its vaccine could make it more effective.

Many academics think it’s unwise to stray from the schedule that has been tested. Yet it’s unlikely that delaying the second dose will lessen these vaccines’ effects overall, says Paul Hunter, Professor of Medicine at the University of East Anglia, and there’s even some suggestion that the second dose could be pushed back even further. However, delaying isn’t risk-free, says Sanjay Mishra, Staff Scientist at Vanderbilt University. Nevertheless, other countries are tentatively following suit: Denmark and France are leaving six weeks between doses.

The UK is also trying other ways of speeding up coverage. Twenty-four-hour vaccination centres are now being trialled, and if people miss appointments, substitutes are being used to make sure someone takes the dose.

Meanwhile, a big question is whether these vaccines will be able to handle new variants of the coronavirus. Having a virus develop out-and-out resistance to a vaccine is rare, explain Louis du Plessis and Celia Souque from the University of Oxford, and the consensus is that the new variant in the UK should be handled by these vaccines just fine. However, there are fears that they might be less effective (though still useful) against an emerging strain in South Africa.

Another big unknown is whether these vaccines’ effects will be long lasting. Only time will tell, but immune responses in COVID-19 patients six to nine months after infection are promising, says Sheena Cruickshank, Professor in Biomedical Sciences at the University of Manchester.

We’re also still yet to find out if COVID-19 vaccines stop people spreading the virus, but work is underway to find out: care home residents and staff who have been vaccinated will be tested afterwards to see if they go on to develop asymptomatic infections. If they do, this shouldn’t be a surprise, says Sarah Caddy, Clinical Research Fellow at the University of Cambridge, as few vaccines prevent infection. And even if vaccinated people can still transmit the virus, their lower viral loads should reduce the spread.

But exactly when vaccines will start having an effect on case numbers and deaths isn’t clear. Because the UK strategy is initially focusing on over-70s, hospital admissions should begin to fall. Admissions increase with age, and reportedly 40% of over-80s have now had a jab. But it will take longer to clear intensive care units, argue Peter Sivey and James Gaughan from the University of York, as most patients there are under 70. Lockdown measures are likely to be needed beyond February, therefore.

Through this period we’ll keep you updated from this column on developments in the UK and beyond, drawing on the wealth of expert material published here on The Conversation and from other publications where genuine expertise is relayed.