Can You Buy Your Way Into Becoming a General in China? 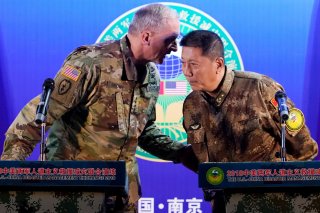 Here's What You Need to Remember: Meanwhile, the U.S. Navy is still reeling from the “Fat Leonard” scandal. Hundreds of officers – including several admirals – have been punished or are under investigation for accepting prostitutes, cash, and other gifts from a defense contractor in return for steering Navy ships to obtain supplies from that contractor.

“Among the officers, 44 of them belonged to the Beijing Military Command where Fang was the commander from 2007 to 2012,” another source told the Post. “They were found guilty of bribing Fang in exchange for promotions. Others were former subordinates who offered Fang bribes when he was promoted to chief of joint staff.”

A major incentive for corruption is the PLA is much a business as an army. The military owns factories, hospitals, and real estate, all of which lucrative opportunities for graft. In 2012, President Xi Jinping launched a military anti-corruption campaign.  According to Chinese state media, between 2012 and 2017, more than 13,000 officers were punished for corruption.

Meanwhile, the U.S. Navy is still reeling from the “Fat Leonard” scandal. Hundreds of officers – including several admirals – have been punished or are under investigation for accepting prostitutes, cash, and other gifts from a defense contractor in return for steering Navy ships to obtain supplies from that contractor.