Can You Launch a Plane from a Cable? In World War II, the U.S. Navy Did It 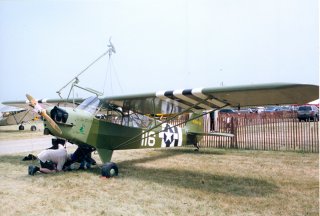 Today’s small drones launch off catapults and land in big nets. Large drones require runways, whether on land or at sea. But it doesn’t necessarily have to be this way, as a wacky—and successful—World War II technique proved.

During the Pacific War, a U.S. Army Air Forces captain figured out how to launch and recover a small airplane from a ship—without using a runway or a landing deck.

It’s still pretty weird. His system looked like a barnstorming circus stunt at sea. But his contraption not only worked—it functioned in combat.

Capt. James Brodie’s work tied him to the sea. Although he flew small planes, he mainly redesigned cargo ships and supervised their loading for the USAAF’s Transportation Command.

But it was World War II, and Atlantic convoys were in desperate need of reconnaissance planes. The Nazi U-boat threat was very real. Aircraft carriers were in short supply and urgently needed in the Pacific.

Facing a similar problem, the British developed their “Hurricat” system. These were Hurricane fighters armed with rockets and hurled from the decks of transport vessels on one-way, anti-submarine missions.

In 1942, Brodie came up with a better idea—albeit a goofy one.

He believed a small, single-engine plane like an L-4 Piper Cub or L-5 Sentinel could take off—and land—from a cargo ship. It just required a trolley running along an elevated cable stretched between the vessel’s masts.

Here’s how it worked. After a hoist and sling device lifted the plane and its crew onto the trolley, a special winch pulled the aircraft back to the ship’s stern-side end.

The pilot gunned the engine, and a clutch released the trolley. The plane rolled along the cable, picking up speed. As the aircraft accelerated, the pilot pulled on a lanyard. This detached the plane from the sling, causing it to soar into the air.

To land the aircraft, the pilot simply lined the aircraft up with the cable, and snagged the sling with a hook. The machine’s winch worked like a fishing reel, and slowed the plane to a stop. Both takeoffs and landings needed only 600 feet of cable—and often less with strong headwinds.

Although seemingly ridiculous, this flying trapeze already had a successful military history. During the 1930s, the U.S. Navy’s airships USS Akron and USS Macon launched and recovered their FS-2 Sparrowhawk biplanes with hooks and retractable trapezes.

The National Inventors Council and the Navy initially scoffed at Brodie’s proposal. But in 1943, he convinced his superiors at the Transportation Command to fund a land-based prototype.

Pilots weren’t easily convinced. USAAF airmen who transited through New Orleans—where Brodie worked—eagerly signed up to test the land-based system, only to back out when they saw it. But the prototype proved successful.

By late 1943, Brodie and the cargo ship City of Dalhart set out for sea trials.

The City of Dalhart’s shipboard rig consisted of two masts placed fore and aft, with the 600-foot-long cable stretched between them off the port side. The crew used hoists and catwalks to reach the rigging, and to lift the small planes on and off the deck.

Rare color footage shows just how well the improbable setup worked. During the trials, a nearby aircraft carrier radioed, “We see it but we don’t believe it.”

The Brodie rig took some skill to use. L-4 Piper Cubs were tail-heavy planes, which meant pilots had to routinely haul back on their joysticks when landing. But doing this during a Brodie landing might cause the propeller to hit the cable, and over-correcting might send the plane crashing into the sea.

Another problem was the moving waves. The masts and cable could swing around in arcs of 30 feet or more when the City of Dalhart rode a swell. But pilots soon mastered the new techniques.

The rig’s hardware weighed less than four tons—light enough for two trucks to carry. On land, Brodie’s system could theoretically equip jungle airfields, although there’s no account of any such deployments.

With proof in hand, the Army and Navy equipped eight Landing Ship Tanks with the Brodie system. But only one vessel, the LST-776, saw actual combat.

Ten hours into the invasion of Iwo Jima, the ship launched three Piper Cubs to spot artillery for the Marines. One aircraft crashed during takeoff, but the other planes accomplished their missions.

Later, as U.S. forces prepared to invade the heavily-defended island of Okinawa, the LST-776 and her Brodie system foiled a remarkable Japanese defense.

“L-5s and L-4s … encountered a small island that was ringed by a series of small caves with what appeared to be small railroad tracks running just beneath the surface of the waves,” recounted Roger Conner, a curator at the Smithsonian National Air and Space Museum.

The pilots reported what they saw back to the fleet. Destroyers then shelled the caves—just to be sure.

“After the island was taken it was realized that there were approximately 350 Japanese suicide boats laying with explosives in each of these caves,” Conner added.

“The purpose of these boats was to ram the rudders of the large ships in the fleet. This would disable them and allow the airborne kamikaze aircraft to come over and attack stationary targets.”

Brodie tried to commercialize his invention after the war. In patent documents, the inventor detailed a more robust, enclosed raceway for the trolley—instead of a cable—and other upgrades to accommodate heavier aircraft.

He envisioned rigs mounted on department store rooftops for “air commuters.” Airplanes could use the system for carrying mail and passengers from ship to shore.

Forest rangers could have a simple way to launch small aircraft in mountainous regions. Brodie also thought the system might be useful for “emergency winter operations anywhere when regular airports are snowbound,” according to the documents.

Obviously, that didn’t happen. Brodie’s system never took off in the civilian world. Now it’s relegated to the pages of aviation history.

But time can’t keep a good idea down, even a goofy, battle-tested one. Drone makers and operators might well revisit this improbable rig for their 21st-century machines.