Can You Name the Best Semi-Automatic Weapons of World War II? 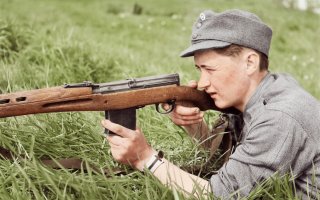 Here's What You Need to Know: Only the M1 Garand proved to be successful

There is no denying that the United States military’s M1 Garand was truly the best of the main battle rifles used in the Second World War. Whereas the other powers largely relied on bolt action rifles that were essentially little improved versions of what had been carried in the trenches of World War I, the American soldier and marine had some semi-automatic firepower.

Yet the M1 Garand wasn’t the only semi-automatic weapon employed in the war—and both the Soviet Union and Nazi Germany employed semi-autos. However, they were no M1 Garand, and it is doubtful Gen. George S. Patton would have called those attempts “the greatest battle implement ever devised.”

Whether it was the greatest battle implement remains a matter of debate, but the fact is clear that the M1 Garand gave U.S. troops a serious advantage on the battlefields across Europe and the Pacific. Some 5.5 million M1 Garands were manufactured, and the weapon offered a higher rate of fire over the bolt action rifles used by the enemy, while it also utilized a larger caliber cartridge than the submachine guns of the era.

The origins of the M1 went back to the First World War, when American military planners had seen that bolt action rifles weren’t providing enough offensive firepower. This led to the development of the Browning Automatic Rifle (BAR) and even the Thompson submachine gun, but it was clear that there needed to be a replacement to the standard infantry rifle.

The M1 Garand was not perfect out of the gate, and it actually took the Canadian-born John C. Garand nearly fifteen years to perfect the weapon. It featured a gas-operated, rotating bolt, which allowed the rifle to fire forty-fifty rounds a minute, which was a considerable step up from most bolt action rifles of the era. It also featured a rear adjustable aperture sight and front wing protected post, and most importantly, the rifle was designed to fire the .30-06 Springfield cartridge. That was same cartridge used with the M1903 Springfield bolt action rifle, the BAR and the .30 caliber Browning Machine Gun.

While ahead of its time in the 1930s, the M1 Garand also had a few notable shortcomings. One of the unique features of the M1 was its “en bloc” clip, which held eight rounds. This did allow for quick reloading of the rifle, where the clip was inserted with a push by the thumb, but one major downside is that if done incorrectly the bolt could slam on the operator’s thumb—resulting in the all-too-common “M1 thumb!” It also couldn’t be “topped off” with extra bullets.

Over the years the Samozaryadnaya Vintovka Tokarea (Tokarev Self-loading Rifle, Model 1940) or SVT-40 has often been mislabeled as the “Soviet’s take on the M1 Garand.” That isn’t exactly accurate, in part because gun designer Fedor Tokarev had been working on his design essentially at the same as the M1 was being developed.

Suffice it to say that military planners around the world were working simultaneously to develop a semi-automatic rifle for the infantry.

The resulting gun that Tokarev designed first entered service in 1938 as the SVT-38, using the same 7.62x54mmR cartridge as the Mosin Nagant, and it was first used in combat in the Winter War with Finland (1939-40). The results were not good, and the reaction from the troops was quite negative. Soldiers found the SVT-38 simply too long and cumbersome, difficult to maintain and worst of all, it had a removable box magazine that fell out at inopportune times. Those were not exactly the sort of features that soldiers—especially Soviet Red Army soldiers—wanted in a gun.

Production ceased on the SVT-38 with just some 150,000 examples in total reportedly made and issued. Given the political climate in the Soviet Union, including Josef Stalin’s purges, Tokarev could have ended up with a bullet in his head for his failure. Instead, he was given another chance.

The weapon was redesigned and designated the SVT-40. It was lighter, and more importantly, simpler to produce—something the Red Army planners appreciated.

The Soviet Union even planned to replace the Mosin Nagant with the SVT-40, and on paper one third of all rifles would be the semi-automatic model. However, a not so funny event occurred that derailed those efforts—namely a German invasion in 1941. That saw hundreds of thousands of rifles captured, but it also meant that the Soviet industry couldn’t keep up with the demand for new weapons.

The aging Mosin Nagant, which had been taken out of service, was reintroduced as it was easier to produce. By war’s end nearly twenty million Mosin Nagants were produced, while production of the SVT-40 only reached five and a half million by war’s end. It is worth noting that more of the SVT-40s were produced earlier in the war than later, as the weapon also didn’t live up to the demands of the Red Army. Basically, the problem was that the Soviets needed an easy to produce and reliable gun, and the SVT-40 proved to be neither.

While the Kar98K was the main rifle in use at the outset of World War II, the German military realized that a more modern rifle was needed, and thus developed the Gewehr 41 (G41), a semi-automatic rifle that offered higher rate of fire. It didn’t borrow from the M1 Garand but featured an improved gas system based on the Soviet Tokarev SVT-40.

One factor may have been that the German military wouldn’t have even encountered the M1 Garand until the Operation Torch landings in North Africa in late 1942. By that time, the German military was already developing its own semi-automatic and it was probably too late to reverse course by the time M1 Garands were captured and evaluated.

Instead, the G41was refined and reintroduced 1943 as the Gewehr 43 or Karabiner 43—thus it is sometimes called the G43 or K43, although the former is usually the more common designation. The naming confusion is due to the fact that the rifle was actually shorter in length than the Kar98K, which was designed as a Karabiner if not actual “carbine” in the American sense.

Regardless of the name, the G43/K43 fired the same 7.92x57mm Mauser rounds from a ten round detachable magazine—actually providing a larger capacity than the M1 Garand.

The G43 was also used as a sniper rifle on the Russian Front, and the vast majority of rifles are equipped with a telescopic sight mounting rail. However, that isn’t really saying much as just over 400,000 G43s—and fewer than 10,000 G41s—were produced during World War II.

What is also notable about all three weapons is only the M1 Garand proved to be successful—at least when compared to the SVT-40 or G43.

Moreover, it should be remembered that all three rifles were ideal for the combat requirements of the Second World War, but all three were obsolete by the early 1950s. The M1 Garand did see use in the Korean War (1950-53) and remained in service until 1959. Neither the Soviet nor German weapons saw future evolution, while the American weapon led to the development of the M14.