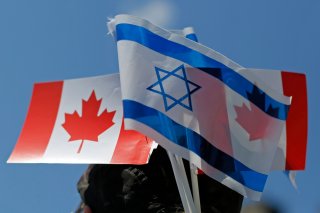 The leaders of the two of Israel’s largest political parties — Benjamin Netanyahu and Benny Gantz — have formed a coalition government.

In an initial six-month period, the coalition will address only two issues: fighting COVID-19 and annexing significant parts of the West Bank.

The annexation agreement was met with swift condemnation by an array of countries and institutions, as well as Israeli human rights activists. In contrast, Canada has developed a debilitating case of diplomatic laryngitis on this issue.

Josep Borrell, the High Representative of the European Union for Foreign Affairs, stated on April 23 that:

“… any annexation would constitute a serious violation of international law. The European Union will continue to monitor the situation and its broader implications, and will act accordingly.”

At the UN Security Council, the French ambassador offered a strong denunciation on the same day:

“It would constitute a blatant violation of international law, which strictly prohibits the acquisition by force of occupied territories. Such steps if implemented would not pass unchallenged and shall not be overlooked in our relationship with Israel.”

The other four European members of the Security Council — the United Kingdom, Belgium, Germany and Estonia — also criticized the looming threat of annexation.

Ireland and Norway, the two countries Canada is competing against for two open United Nations Security Council seats in 2021-22, have both publicly opposed Israel’s annexation plans.

Leading Israeli human rights organizations, including B’Tselem and Yesh Din — have spoken out against the proposed annexation. A joint letter by prominent liberal Israelis — including former ambassadors, the former speaker of the Israeli Knesset and prominent writers — said:

“For too long the world has sufficed with issuing condemnations in response to the government of Israel’s ongoing breach of international law and its human rights violations against Palestinians in the West Bank and Gaza Strip.”

But where’s Canada? As a Special Rapporteur for the United Nations Human Rights Council on the situation in the Palestinian territory, I argue that Canada is missing in action.

No public statements against Israel’s annexation proposal have been issued. No planned accountability measures have been floated. No criticism, however mild, has been offered.

In mid-March, Foreign Minister François-Philippe Champagne did, however, issue a statement related to illegal annexation. He marked the sixth anniversary of the Russian annexation of Crimea by saying that: “Canada unequivocally condemns this violation of Ukraine’s sovereignty and territorial integrity and of international law.”

The unilateral annexation of territory is strictly prohibited in international law. This is a centrepiece of the 1945 Charter of the United Nations, and has been consolidated by treaties and resolutions, judicial rulings and scholarly writings ever since.

Indeed, this prohibition has acquired the status of a jus cogens norm in international law, meaning that it is accepted as a fundamental principle of law by the international community and no exceptions are permitted.

Speaking specifically to the five-decade-long Israeli occupation, the UN Security Council has affirmed, on eight occasions since 1967, the principle of “the inadmissibility of the acquisition of territory” by war or force. This principle was cited by the council to condemn as unlawful Israel’s two prior annexations of East Jerusalem, in 1980, and the Syrian Golan Heights in 1981.

When Russia invaded and annexed Crimea in 2014, Canada, along with most of its western allies, swiftly followed their unreserved condemnations with substantive economic and political counter-measures.

Russia was expelled from the G8, import and export bans were imposed for goods manufactured in Crimea, an array of economic sanctions and restrictions were enforced and targeted individuals faced travel bans and asset freezes.

The Israeli annexation of parts of the West Bank is a central feature of U.S. President Donald Trump’s so-called Peace to Prosperity Plan on the Middle East, announced in late January 2020.

In response, the European Union stated that the plan broke with “internationally agreed parameters,” while Pope Francis warned about the “danger of inequitable solutions.”

According to an open letter from 50 former European prime ministers and foreign ministers:

“The plan envisages a formalization of the current reality in the occupied Palestinian territory, in which two peoples are living side by side without equal rights. Such an outcome has characteristics similar to apartheid — a term we don’t use lightly.”

Canada’s official response was a vanilla statement by Champagne that would have left no one in the White House unhappy. He said:

“Canada recognizes the urgent need to renew efforts toward a negotiated solution to the Israeli-Palestinian conflict, and will carefully examine the details of the U.S. initiative for the Middle East peace process.”

In 2010, Canada lost its prior bid for a Security Council seat partly because of the Stephen Harper government’s supine embrace of Israel.

In 2015, newly elected Prime Minister Justin Trudeau announced that “Canada is back” on the world stage and promised to support a rules-based international order.

Same as it ever was under Trudeau

Yet under Trudeau, Canada has maintained Harper’s consistent pro-Israel voting record at the UN General Assembly, and avoided even polite criticism of Israeli behaviour in the occupied Palestinian territory that most other middle powers routinely censure.

In 2018, Canada’s Parliament renewed its free-trade agreement with Israel, which continues to allow goods from the illegal Israeli settlements to enter the Canadian market tariff-free, notwithstanding domestic legislation that designates civilian settlements in occupied territory to be war crimes.

In its current Security Council bid, Canada faces two serious challengers in Norway and Ireland that have solid international reputations, the built-in support of their European neighbours and a principled position on the protracted Israeli occupation of Palestine.

If Canada’s campaign for a council seat is once again unsuccessful, its taciturn approach to the Israeli-Palestinian conflict will surely have been a contributing factor.

Michael Lynk is an Associate Professor with the Faculty of Law at Western University.