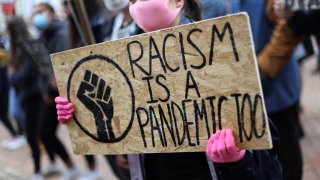 A new Cato Institute/​YouGov national survey of 2,000 Americans finds that 62% of Americans say the political climate these days prevents them from saying things they believe because others might find them offensive. This is up from 2017 when 58% agreed with this statement. Majorities of Democrats (52%), independents (59%) and Republicans (77%) all agree they have political opinions they are afraid to share.­­

Strong liberals stand out, however, as the only political group who feel they can express themselves: 58% of staunch liberals feel they can say what they believe.

Centrist liberals feel differently, with 52% who feel they have to self‐​censor, as do 64% of moderates, and 77% of conservatives. This demonstrates that political expression is an issue that divides the Democratic coalition between centrist Democrats and their left flank.

What’s changed? In 2017 most centrist liberals felt confident (54%) they could express their views. However today, slightly less than half (48%) feel the same. The share who feel they cannot be open increased 7 points from 45% in 2017 to 52% today. In fact, there have been shifts across the board, where more people among all political groups feel they are walking on eggshells.

Although strong liberals are the only group who feel they can say what they believe, the share who feel pressured to self‐​censor rose 12 points from 30% in 2017 to 42% in 2020. The share of moderates who self‐​censor increased 7 points from 57% to 64%, and the share of conservatives rose 70% to 77%, also a 7‐​point increase. Strong conservatives are the only group with little change. They are about as likely now (77%) to say they hold back their views as in 2017 (76%).

50% of Staunch Liberals Support the Firing of Trump Donors

The survey finds that “cancel culture” goes both ways. Nearly a quarter (22%) of Americans support firing a business executive who personally donates to Democratic presidential candidate Joe Biden’s campaign. This share rises to 36% among strong conservatives who support firing Biden donors. These results are particularly notable given that most personal campaign contributions to political candidates are public knowledge and can easily be found online.

32% Worry Their Political Views Could Harm Their Employment

Nearly a third (32%) of employed Americans say they are worried about missing out on career opportunities or losing their job if their political opinions became known. Americans across the political spectrum share these concerns: 31% of liberals, 30% of moderates, and 34% of conservatives are worried their political views could get them fired or harm their career trajectory. This suggests that it’s not necessarily just one particular set of views that has moved outside of acceptable public discourse. Instead these results are more consistent with a “walking on eggshells” thesis that people increasingly fear a wide range of political views could offend others or negatively impact themselves.

The topline questionnaire, crosstabs, full methodology, and analysis of the survey findings can be found here.

The Cato Institute Summer 2020 National Survey was designed and conducted by the Cato Institute in collaboration with YouGov. YouGov collected responses online during July 1–6, 2020 from a national sample of 2,000 Americans 18 years of age and older. Restrictions are put in place to ensure that only the people selected and contacted by YouGov are allowed to participate. The margin of error for the survey is +/- 2.36 percentage points at the 95% level of confidence.

This article by Emily Ekins first appeared in CATO on July 22, 2020.