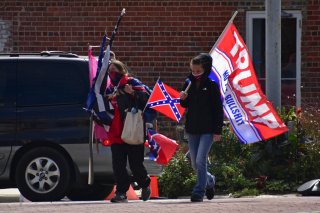 The terror inflicted on the U.S. Capitol on Jan. 6 laid bare America’s problem with violent extremism.

The FBI and other law enforcement agencies have begun to piece together the events of that day, while attempting to thwart any impending attacks. Scores of people have been arrested and charged over the attack – the vast majority being men.

In the wake of these events, there were stories attributing the violence and destruction to “white male rage” “violent male rage” and “angry white men.”

But what about the women?

To distill the violent insurrection into a tale of angry male rage is to overlook the threat that women in the mob posed to congressional officials, law enforcement and U.S. democracy that day.

Several women have been identified as alleged participants in the events of Jan. 6. Among those women are a former school occupational therapist, an employee of a county sheriff’s office, a real estate broker and a former mayoral candidate.

At least one woman is being investigated for her role in organizing the attack with fellow members of the Oath Keepers, a far-right militia movement. And Ashli Babbit, a female veteran, was shot dead by police while attempting to breach the Senate floor.

The women who took part in the siege of the Capitol are part of a long history of women’s participation in extremist violence, both in the United States and abroad.

Women have buoyed American far-right organizations and causes for centuries. In her recent book on women at the forefront of contemporary white nationalism, author Seyward Darby writes that women are not “incidental to white nationalism, they are a sustaining feature.”

Since the late 1800s, women have supported and enabled the terrorist white supremacist organization the Ku Klux Klan, while hundreds of thousands joined its female affiliate, Women of the Ku Klux Klan, and its predecessors.

Women helped establish the Klan’s culture, bolstered its recruitment efforts and manufactured its propaganda. Despite its hyper-masculine ideology, which identifies white men as the primary arbiters of political power, women have also held leadership positions within the modern-day Klan.

More recently, women have joined the far-right Proud Boys movement, which has openly recruited female foot soldiers. In December, a growing rift between male and female Proud Boys was reported. After experiencing intense sexist backlash from men in the organization, women led by MMA fighter Tara LaRosa began their own group, the Proud Girls USA.

To leave one extremist organization in order to form another suggests a deep commitment to the far-right cause.

A 2005 study noted a disconnect between the rise in women within American right-wing terrorist organizations and the attention it received from law enforcement.

Despite a marked increase in women’s engagement in acts of terror against the state and racial minorities, security officials have largely failed to publicize, search and interrogate women operatives in these organizations, even after they become known to law enforcement.

There is also evidence that American far-right women have drawn inspiration and tactical knowledge from women engaged in extremist violence abroad.

Evidence from the global war on terror points to the potential dangers of ignoring the growth of violent extremism among women. In Iraq, for example, female terrorists carried out large numbers of deadly suicide attacks against American assets during the U.S. occupation.

The rest of the world has since been forced to grapple with the reality of violent women after female terrorists staged lethal attacks in Nigeria, Somalia, Tunisia, the Philippines, Indonesia and France.

Recent terror attacks in American cities such as San Bernardino, California, and Las Vegas that featured women among the perpetrators confirm violent women have already inflicted damage on U.S. soil.

Gender bias can be deadly

In fact, my research suggests that attacks by female terrorists are often more destructive than those executed by their male counterparts.

In an analysis of over 2,500 global suicide attacks, I show disparities in the severity of male and female attacks are greatest where gender stereotypes suggest that women are neither violent nor political. Such tropes can blind security officials and civilians to the threat posed by women terrorists, causing them to overlook the potential for female complicity.

Female terrorists, including in Iraq, Israel and Nigeria, have been able to deflect suspicion because they were women. My research shows that gender bias can become deadly when it stops effective counterterrorism policies, such as surveillance, searches and interrogations, from being implemented.

Additionally, since ordinary citizens played an unusual role in exposing the identities of the Capitol attackers, gender biases among civilians are also relevant. Failure to accept women’s complicity in the Capitol siege and the broader movement may prevent the identification of female offenders and impedes efforts to punish and deter future attacks.

To construct an accurate account of the Capitol attack, it’s necessary to ask “Where are the women?” And the answer is, “Right there.”