Cargo Delivery by Rocket? The U.S. Military Wants to Try. 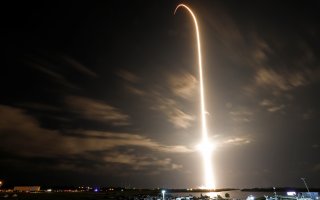 Here's What You Need to Know: Rockets could be a way to handle vast distances quicker than current platforms.

While the U.S. military operates enormous aircraft that can deliver cargo anywhere in the world, there is the issue that the airspace isn’t always safe and the time it takes to fly to remote corners of the earth can simply take too long. Last month it was reported that the U.S. military was working with SpaceX to help develop a far speedier solution – one using rockets.

“Think about moving the equivalent of a C-17 payload anywhere on the globe in less than an hour,” U.S. Army Gen. Stephen R. Lyons, commander, U.S. Transportation Command (U.S. TRANSCOM), said during his virtual remarks at the Airlift/Tanker Association’s (A/TA) Conference on October 28, 2020. “Think about that speed associated with the movement of transportation of cargo and people. There is a lot of potential here and I’m really excited about the team that’s working with SpaceX on an opportunity, even perhaps, as early as twenty-one, to be conducting a proof of principle.”

By working with industry, the military could develop such a space prototype within the next five to ten years, which could be used by U.S. TRANSCOM to complement its air, sea and land logistics operations.

“I’ve seen how fast some commercial space transportation providers are developing game-changing capabilities, and a 2021 proof of principle to deliver, perhaps, humanitarian assistance somewhere around globe, on a rocket transport mission, is well within the realm of possibility,” Lyons added.

Rockets could be a way to handle vast distances quicker than current platforms. Logistics has traditionally labored under the “tyranny of distance and time, and global access,” U.S. TRANSCOM has noted.

It offered the example that for operations in the Pacific Ocean Theater supplies may transit ten thousand miles one way.

“For the past seventy-five years or so, we have been constrained to around forty thousand feet altitude and six hundred miles per hour in our very fastest method of logistics delivery—airlift,” said USTRANSCOM deputy commander, U.S. Navy Vice Adm. Dee Mewbourne, who leads the command’s effort in this area.

An issue to resolve is that current space transportation is also more weight- and volume-constrained than airlift, and faces challenges in positioning and launching as well as recovery operations. However, as industry advances to overcome those challenges—including costs—this could be an attractive alternative for the delivery of material to distant locations. Commercial space transportation could allow for point-to-point rapid movement of vital resources while eliminating en route stops and notably air refueling.

This capability has been described as potentially being one of the greatest revolutions in transportation since the airplane.

“Now, what are the possibilities for logistical fulfillment at about ten times those figures, when the need for support on the other side of the world is urgent,” added Mewbourne. “It’s time to learn how our current strategies to project and sustain forces can evolve with a new mode of transportation.”

The next step will involve testing, which will enable the Department of Defense to evaluate the capabilities, limitations, and technical/policy gaps, as well as exercise current policies and procedures. U.S. TRANSCOM will also have to address doctrinal, diplomatic, statutory and organizational issues to facilitate the standardization of high-frequency, commercial, point-to-point, space launches.

“Forward-thinking like this enhances the options of dynamic force employment. It also places global logistics at the tip of the spear and will provide commanders new options,” said U.S. Air Force Col. Max Bremer, North American Aerospace Defense Command /U.S. Northern Command and U.S. Space Command liaison officer to U.S. TRANSCOM. “The use of space for military logistics could be the biggest game-changer since the development of cargo aircraft.”