Carriers or Battleships? The Navy Once Thought ‘Why Not Both?’ 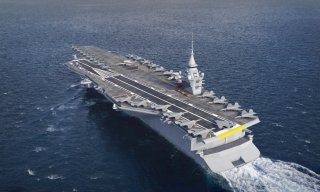 Here's What You Need to Remember: Every Japanese carrier converted from a battleship was lost during the war. Three out of the four British conversions met the same fate, as did USS Lexington and Independence-class carrier USS Princeton.  Converting battleships offered a shortcut to carrier aviation, but ensured that the resultant carriers would have significant design flaws.

Both aviators and sailors grasped early on that aircraft could revolutionize some aspects of naval warfare. At the very least, manned aircraft could supply the battlefleet with information about the size and disposition of the enemy; at the most, these aircraft could deliver ordnance themselves. As the relationship between ships and aircraft developed, it became apparent that having some means of launching planes directly from ships offered the best chance of successfully integrating aircraft into fleet operations.

And almost as soon as navies began to contemplate the idea of aircraft-carrying warships, they started thinking about how to combine the virtues of the battleship and the aircraft carrier into a single large hull. For decades, usually with minimal success, navies would pursue the dream of a hybrid battleship-aircraft carrier.

The first effort at a hybrid carrier hit the water in 1918. The Royal Navy, at a loss with what to do with the large, fast, but nearly useless HMS Furious, decided to convert her into a combination aviation warship. Initially intended to carry two 18” guns in single turrets, fore and aft, Furious was modified during construction to carry seaplanes, necessitating the removal of the forward turret.  Early trials indicated some prospect for the launching and landing of conventional aircraft, although such tests often proved fatal to aviators. Eventually, the aft turret was also removed, offering a more suitable arrangement and allowing Furious, along with several conventional aircraft, to engage in precursors to the great carrier raids of World War II.

At the end of the war, the Royal Navy ditched the idea of a hybrid, but still saw considerable value in big battleship hulls. Consequently, it fully converted Furious into an aircraft carrier, followed by her two half-sisters Courageous and Glorious. The incomplete battleship Eagle received the same treatment. The Washington Naval Treaty actively encouraged similar behavior in Japan and the United States, leading to the conversion into aircraft carriers of two Lexington-class battlecruisers, one Amagi-class battlecruiser, and one Tosa-class battleship.

Even at this point, the allure of combining heavy guns with aircraft carrying capacity remained.  Many of the conversions continued to carry heavy (although not battleship caliber) guns, weapons that were often removed as the vulnerabilities of carriers to gunfire became apparent. For their part, most of the battleships that survived World War I and the interwar naval treaties acquired floatplanes of their own. Of new construction, the giant Yamatos could carry seven aircraft, and most other battleships two or three. The relationship between carrier and battleship would remain unsettled, but general agreement emerged that large warships should either be (mostly) aircraft carrier or (mostly) battleship.

In the late 1930s, the Imperial Japanese Navy (IJN) built a pair of heavy cruisers, Tone and Chikuma, with the main armament forward and the aft deck dedicated to flight operations. This provided IJN task forces with a few extra scouting aircraft. In June 1942, the IJN Navy came to the conclusion that it required more flight decks. At first, it gave strong consideration to converting Hyuga and Ise, two of its older battleships into aircraft carriers. Expensive and time-consuming, this would have resulted in slow, substandard ships. Instead, IJN opted for half measures, removing the aft two turrets and replacing them with a flight deck, catapults, and other aviation equipment. Theoretically, Hyuga and Ise could now each carry thirteen aircraft of various types, while also retaining a main armament of 8 14” guns in four twin turrets.

Japanese desperation continued to grow, however. Around the same time Hyuga and Ise entered reconstruction, the IJN determined to redesign one of its new Yamato-class battleships, then under construction, into an aircraft carrier. The resultant Shinano displaced around 60,000 tons and was, for a carrier, stoutly built and well-armored. Intended as an aviation support ship, she did not carry many aircraft, but had extensive machine shops, stores, and other facilities to provide services to a carrier battle group.

Fortunately or not, the IJN never operated Hyuga and Ise in their carrier configuration. The lack of pilots and crew became more severe than the lack of flight decks, and the aviation areas of the ships were mostly used for anti-aircraft guns. Both ships almost encountered the U.S. battlefleet at Leyte Gulf, however, where they would have suffered from the lack of their rear turrets.  For her part, Shinano was lost to submarine attack during her shakedown cruise, and never launched aircraft in anger.

The United States Navy (USN) also returned to the well of carrier conversions, halting construction of nine Cleveland-class light cruisers and redesigning them as the Independence-class light aircraft carriers.  Although small, these ships were fast enough to support fleet carrier operations from 1943 on, and provided a key bridge between the early war carriers and the excellent Essex class ships.  The USN later built the two Saipan-class light carriers on Baltimore-class heavy cruiser hulls, and used design work for the massive Montana-class battleships on the huge Midway-class carriers.

Few of the conversions were entirely successful. Every Japanese carrier converted from a battleship was lost during the war. Three out of the four British conversions met the same fate, as did USS Lexington and Independence-class carrier USS Princeton.  Converting battleships offered a shortcut to carrier aviation, but ensured that the resultant carriers would have significant design flaws.  Nevertheless, these early ships helped all of the navies develop lessons for their later, purpose-built aircraft carriers.

Dr. Robert Farley, a frequent contributor to TNI, teaches at the Patterson School of Diplomacy and International Commerce at the University of Kentucky. He is the author of the Battleship Book and can be found at @drfarls. This article first appeared last year.