Caught on a Smartphone: Watch a Saudi F-15 Destroy a Houthi Drone in Yemen 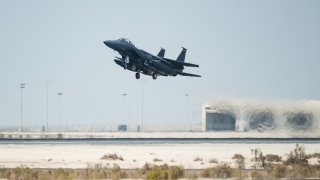 Here's What You Need to Remember: The drone shot down by the F-15 in the footage appears to be a Qasef-1, which is a suicide drone based on an Iranian design.

A new video of a Saudi Arabian F-15 taking out a suicide drone launched by Houthi rebels in Yemen surfaced on social media last year. These sorts of intercepts are not uncommon, but getting to watch an F-15 in the wild taking down targets on video is pretty rare indeed.

The footage was first brought to our attention by Joseph Trevithick over at The Warzone.

The video, which appears to have been recorded on a smartphone, opens with a view of the suicide drone motoring along. Suddenly, an explosion tears through the frame–apparently detonating the vicinity of the drone, knocking it out of the sky. Shortly after the explosion, a Saudi F-15 can be seen prowling the area.

Saudi Arabia operates a purpose-built iteration of the famed American dogfighter known as the F-15SA. Although the U.S. stopped making new orders for F-15s nearly two decades ago, Saudi Arabia and Qatar in particular have kept their focus on the highly capable 4th generation fighter, funneling more than $5 billion into improvements over the years. Today, many of those improvements are being leveraged for the U.S. Air Force’s new and improved F-15EX that Boeing recently began delivering to the force.

The drone shot down by the F-15 in the footage appears to be a Qasef-1, which is a suicide drone based on an Iranian design. Houthi rebels in Yemen have been operating these and a number of other kinds of suicide drones for years now, thanks to their low cost and high-destructive capability. Over that time, the Saudis have become extremely proficient at intercepting these drones, but at a significant cost. While the suicide drones cost practically nothing, the surface-to-air and air-to-air missiles the Saudis shoot them down with can cost hundreds of thousands of dollars apiece, not including the operational costs of highly capable fighters like the F-15SA.

Iran is believed to have outfitted Houthi rebels with a variety of drones, some with ranges in excess of 1,300 miles. The United States has provided the Saudis with varying degrees of support in their war against the Houthi rebel group currently engaged in a longstanding civil war with the Yemini government since before 2015. If you’re interested in reading an in-depth explanation into who the Houthi rebels are and what led to this conflict, this article by Bruce Riedel for Brookings is a must-read.

If you want to learn more about the F-15EX, check out our video on it below: