Caught on Tape: B-2 Stealth Bombers Flattened This Airfield 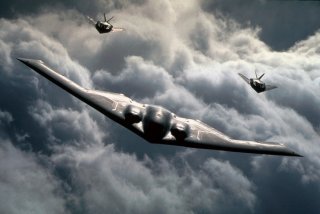 Here's What You Need to Remember: Its stealth technology also means that the only warning someone has that a B-2 is overhead with hostile intentions will be when the bombs hit.

A few years ago, the Air Force ran one test of the B-2 with the 500-pound JDAMs. The plane was loaded with 80 inert versions of the GBU-38 and was sent to hit a simulated airfield in Utah. In addition to two runways, there were other targets simulated, including an SA-6 “Gainful” missile site, an SS-1 Scud launch site, an aircraft revetment, a hangar, and the other accouterments that one finds around an airfield.

Think of it as a stealthy version of an ArcLight.