Chadwick Boseman is a Greater Hero Than the Black Panther 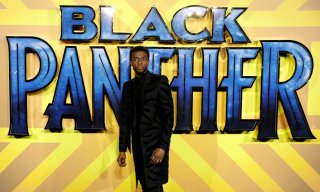 The public condolences offered for Chadwick Boseman, such as David Sims’ piece in The Atlantic, frequently refer to the actor as “heroic.”

For many, Boseman crafted his personal life with the same regal comportment he used when playing the role of T’Challa, the beloved king-cum-chief-warrior and Black Panther.

To illustrate their mirrored qualities, consider that both Boseman and Boseman’s T’Challa are not only well-dressed but distinctly fashionable.

Both not only command international audiences with their rhetorical skills, but offer speeches that are inspiring. And when both faced imminent death, they did so with uncommon bravery and grace: T’Challa in a ritual battle for Wakanda’s throne when his nemesis-cousin Erik Killmonger throws him over a cliff, vis-à-vis Boseman, as he battled colon cancer.

But, if truth be told, Boseman’s everyday valour exceeds the heroism depicted in Black Panther, because Boseman’s heroism emanates from an ethical understanding of Black humanity. The same can’t be unequivocally said for Hollywood’s film, particularly in how it relied on stereotypes to both exalt a hero and demonize a villain.

Indeed, Boseman displayed remarkable enactments of Black manhood in his personal life — enactments that honour, respect and buttress a kaleidoscope of other Black masculinities.

To put it another way, Boseman’s real-life Black masculine performance exceeds the gallantry of Hollywood’s attempt at a Black superhero. Representations of various other Black masculinities are either absent from or vilified within fictions emanating from Hollywood; these movie portrayals are what inform perceptions of Black men.

Compare, for example, the masculinity of T’challa with that of Erik Killmonger (portrayed by Michael B. Jordan). He is a former United States Navy SEAL and veritable modern-day Black berserker.

To illustrate, Killmonger delivers a strong denunciation — dripping with Black English and masculinity — when he defeats T’Challa: “Is this your king?” he asks loudly. “Huh? … He’s supposed to protect you! To lead Wakanda into the future! Nah, I’m your king!”

Making urban Black masculinity the extreme antagonist, the object of scorn, is too easy, perhaps expected. This is where, to my mind, Black Panther as a film fails in depicting Black manhood.

What’s more, Killmonger is pitted against the other male figures because his actions are viewed as despicable, fuelled by desperate hopes to be Wakandan, the nation’s king and to root out injustice against Blacks all over the world by creating tyranny with Wakandan technology.

The practice of negatively comparing African American men to their African brothers, with the effort to devalue the African American, is not lost on the “woke” consumer.

There are long-standing distinctions amplified in cultural practices or sentiments that pit one kind of acceptable brown or Black person against another type that’s despised. During legal segregation in America (circa 1896 to 1954) Africans and other dark-hued men were not subject to the same level of discrimination and racism in America as their African American brothers: As I have previously argued, in order to benefit from the rights guaranteed them as citizens and to be treated fairly, some dark-skinned African Americans passed, ironically, as dark-skinned non-citizens. These individuals, of course, also had to disassociate themselves from other American Blacks.

Booker T. Washington provides examples of this circumstance in his critical 1901 memoir Up From Slavery. Washington reports that an angry white mob set to hang an African from Morocco because the Moroccan was lodging at a racially exclusive hotel. The man escaped the lynching by speaking Arabic and proving he was not an American-born Black man.

Distinctions of pitting one kind of “acceptable” brown or Black person against another did not end with desegregation. Currently it’s the Black urban underclass that’s despised.

Thus, notwithstanding the pyrotechnics within the Hollywood blockbuster, Black Panther is a rather flat hero, even if he is also the kind Hollywood audiences want to love. The character is flat and probably beloved because he fully participates in the mundane narrative that urban Black masculinities are in need of saving, and their saviours are either white or romanticized African or both, as depicted in the movie.

Where Black Panther fails, however, on Black masculinities, Boseman himself prevails. Boseman did not pit and privilege one type of masculine performance against and over another. In his 2018 commencement address at Howard University, Boseman recalls playing an urban “young man in his formative years with a violent streak pulled into the allure of gang involvement.”

But Boseman asked the producers for more about the character’s background. He says: “That’s somebody’s real story. Never judge the characters you play. That’s what we were always taught.… [B]ut I was conflicted because this role seemed to be wrapped up in assumptions about us as Black folk.” Boseman was fired for asking questions about the humanity of his character, his agents telling him there was now a stigma and he was seen as “difficult.”

And who could forget Boseman giving away the MTV award he received for his role in Black Panther to James Shaw Jr., a Black man who took down a shooter at a Waffle House. Boseman said, “Receiving an award for playing a superhero is amazing, but it’s even greater to acknowledge the heroes that we have in real life.”

For me, the lesson of Boseman’s legacy isn’t how similar he was to Black Panther the superhero, but rather how much better he was than T'Challa of Hollywood, especially in creating positive space for other black masculinities.