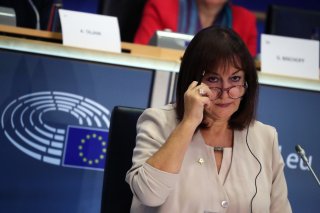 In the wake of the shocking events in Washington, DC, the EU’s foreign policy chief, Josep Borrell, published a blog laden with sound and fury, beseeching Europeans to heed the “wake-up call for all democracy advocates around the world world” and to “stand up immediately to every violation of the independence of democratic institutions”.

Many Europeans have felt downcast about the precipitous slide away from cardinal values, including democracy, instigated under President Donald Trump since his 2016 election. Egged on by the continued egregious allegations by Trump of election fraud, a large body of his supporters seized the opportunity to surround and ultimately break into the Capitol Building while members of Congress endeavoured to approve the results of the 2020 election.

Europeans are still trying to figure out what happened. Was this flashpoint merely an opportunity for an ill-informed group of violent Trumpites to further express their anger, or was it a localised example of deep-seated discontent that has taken permanent root in America?

And is it only in America that people have been duped by their leader? A fair bit of duping has been occurring too in some European nations, inflicting serious damage to its democratic credentials.

For Borrell, democracy itself is at stake, both as a value, and mode of government. He too argues that there is a need to “fight harder against disinformation”. Faith in democracy must be found anew and and those European institutions in which democracy rests must be defended. This means fighting back against governments in EU countries that have turned away defiantly from democracy towards unconstrained populism and authoritarian rule.

Tech is too big

If these seem rather unlikely enemies of the state, for Jourová, they represent the building blocks of digital accountability that make up democracy in a digital age. Without them, neither freedom of expression nor the ability to eradicate disinformation and fake news campaigns can be guaranteed.

Jourová suggests that the European democracy action plan – a broad roadmap of how 2021 Europe can galvanise faith in democratic governments – should be underwritten by sharper use of new rules and regulations, including an ongoing plan to curb tech monopolies.

Europe is going to need something really substantial to rebuild trust in democracy at home. While Biden is fighting to rebuild his country, the EU needs to accept that it has permitted some perfidious descents of its own in both its domestic and foreign policy.

In Poland, EU leaders and institutions alike have tolerated or even wilfully ignored how Jarosław Kaczyński’s incongruously named Law and Justice party has eroded a whole series of norms, including the independence of the judiciary. In Hungary, the Fidesz party under Viktor Orbán has exercised breath-taking examples of undemocratic governance, from snuffing out freedom of the press, independent academic institutions and NGOs, and misappropriation of EU funds.

Romania and Bulgaria are exhibiting similar erosions of democracy, rule of law and good governance. Externally, from lacklustre attitudes to Belarus and its own near neighbourhood, to exclusively interest-based dealings with China and Russia, the “pragmatic turn” appears to have taken precedence, rather than balance, with the EU’s former canon of value-led foreign policy designs.

Optimists, however, may argue that there’s no time like the present. Trust in democracy at home, and soft power aboard, is at rock bottom. What better time to turn with unflinching eye and renewed zeal to addressing the torn fabric of European democracy? To call out the false prophets. To sanction the offenders. To remedy the transgressed.

A good place to start might be the European People’s Party group in the European Parliament, which ought to expel the Fidesz party from its membership instead of just repeatedly suspending it. Next could be the European Council, which must start insisting that EU funds will only be available to nations who uphold the rule of law, thus ensuring that no European leader can act with impunity.

In their global dealings, European leaders must speak and act more strongly. Shouting down Trump wasn’t that difficult, especially towards the end. What is more challenging will be ensuring that Europe’s bilateral deals with China and Russia – and indeed the US under Biden – all resolutely promote democracy as a global value, and its role as the keystone of liberal internationalism. The same applies in its dealings with key global clubs, including the UN (and the World Health Organization), NATO and the G20.

Too idealistic? Certainly, no liberal state or organisation can ever operate wholly on the basis of liberal principles. There will always be pragmatism and even hypocrisy in how national communities choose to govern as liberal democracies. The point is simply to keep at it. Even flawed liberal democracies – simply by continuing to operate and seasonally rededicating themselves to their founding ideals – provide the opportunities for the very struggles that return us to healthy democratic practices.

Do it right, and both the US and Europe will be on surer footing through the difficult times ahead in 2021. Fail to do it, and the entire governing philosophy of western liberal democracy will carry a mortal wound well into the middle of the century.

Amelia Hadfield, Head of Department of Politics, University of Surrey