The Cheap Cessna Plane Terrorized ISIS from Above 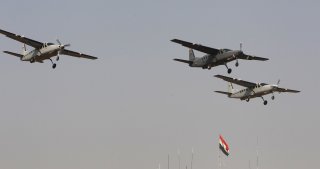 Here's What You Need to Remember: In fact, the Cessna 172’s younger sister, the Hellfire missile packing Cessna AC-208, has been terrorizing the skies over the Middle East for years thanks to a conversion handled by Orbital ATK, a subsidiary of Northrop Grumman.

The U.S. military leads the world in stealth aviation technology, but not every fight requires a fast-moving, radar defeating fighter; sometimes all it takes to win a fight is a good old-fashioned Cessna strapped to the nines with Hellfire missiles.

Cessna may be the most well-known name in civilian aviation, with the Cessna 172 widely recognized as the most successful aircraft in history. There have been more Cessna 172s built than literally any other airplane on earth, and chances are, if you ever take classes to earn your pilot’s license, a fair portion of the hours you log will be in a 172. The aircraft’s sturdy, high-wing design and reliable powertrain coupled with its low cost and availability make it a favorite for flight schools who value its ability to fly multiple times per day with inexperienced pilots.

In fact, the Cessna 172 is so user-friendly that an inexperienced German teenager managed to fly his Cessna straight through the most elaborate air defenses in the world at the time to park his 172 right in Moscow’s Red Square. The ordeal led to the firing of numerous senior Soviet defense officials and may have helped usher in the end of the Cold War. Not bad for an aircraft I’ve heard described as a “lawnmower with wings” by fighter pilots.

Related: HOW A TEENAGER WITH A CESSNA HELPED TOPPLE THE SOVIET UNION

But Rust’s wasn’t the only Cessna to get involved in the squabbling of nations. The same things that make Cessnas such good choices for beginner pilots (low cost, ease of use, low stall speed, resilient design) also make the aircraft an excellent choice for reconnaissance, surveillance, and even some combat air support in environments without formidable air defenses. In fact, the Cessna 172’s younger sister, the Hellfire missile packing Cessna AC-208, has been terrorizing the skies over the Middle East for years thanks to a conversion handled by Orbital ATK, a subsidiary of Northrop Grumman.

The AC-208 can pack Hellfire missiles and 70mm rockets

Converting the Cessna C-208 into the AC-208 Combat Caravan, also known as the Eliminator, required more than simply mounting some rails underwing. In order to leverage the incredible accuracy offered by the AGM-114 Hellfire missile, ATK equipped the Cessna with a combat sensor suite and laser-designator that can be used to pinpoint targets on the fly.

Hellfire missiles are incredibly accurate–so accurate that a secretive version of the weapon has been built that forgoes explosives in favor of retractable swords for targetting bad guys using civilians to shield them from more conventional airstrikes. In the hands of a capable operator with a laser designator, Hellfire missiles can be fired from Cessna’s AC-208 at targets that are literally miles away. The AC-208 can also carry “fire-and-forget” AGM-114K Hellfires, which are guided by their own internal radar, and don’t require continued control after firing.

Related: THE STORY OF AMERICA’S HELLFIRE MISSILE FULL OF SWORDS

While Hellfire missiles represent the most potent ordnance this Cessna brings to the fight, the AC-208 has other options available to it. Its modular and reconfigurable weapons system allows for the mounting of two Hellfire missiles beneath each wing for a total of four weapons, but each wing can also carry a rocket pod that can be used to deploy a variety of guided 70mm rockets, including the Advanced Precision Kill Weapon System (APKWS) or Guided Advanced Tactical Rockets (GATR).

Ballistic panels were also added to the AC-208’s cockpit to protect the pilot and sensor operators from small arms fire while conducting low passes over an active combat zone. A variety of screens mounted in the cockpit offer all sorts of information, from common in-flight control data to feeds sourced from the aircraft’s high-definition electro-optical/infrared (EO/IR) sensors. As many as six different sensors can be mounted on the MX-15D turret the AC-208 uses to find its prey. Each aircraft carries a crew of three: a pilot, a co-pilot, and a mission system operator to oversee the sensor and weapon systems.

While modern and advanced air defense systems can engage aircraft at nearly any altitude, most dated and shoulder-launched platforms in use in places like Iraq and Afghanistan are limited to targetting aircraft at 10,000 feet or lower. The Hellfire-packing Cessna AC-208 can fly at more than twice that altitude, but just in case, it also comes equipped with a missile warning system and BAE Systems AAR-47/ALE-47 Defensive Countermeasures System meant to throw off an inbound infrared or radar-guided missile with flares or chaff.

Speed isn’t a high priority for the AC-208–in fact, it’s the aircraft’s ability to maintain very low speeds while surveying its environment that makes it so handy over war zones in Iraq, Afghanistan, and other nations across Africa and South America. Its 876 horsepower Pratt & Whitney PT6A-140 turboprop can push this Hellfire packing Cessna along at a respectable 213 miles per hour for distances in excess of 1,200 miles. When serving as a stable reconnaissance platform, the AC-208 can fly as slowly as just 70 miles per hour without risk of stalling the engine.

Its rugged tricycle-style landing gear is perfectly suited for operating from austere airstrips, or even just a nice, flat stretch of field.

Related: SOCOM’S ARMED OVERWATCH PROGRAM LOOKS LIKE A BLAST FROM THE PAST

The idea behind the AC-208 Eliminator is believed to have come from the U.S. military, who were looking to find an inexpensive way to equip the Iraqi government with much-needed air support assets. They contacted Orbital ATK in 2008 to discuss converting the civilian Cessna C-208 into a militarized airplane that could carry ordnance like Hellfire missiles, as well as conduct reconnaissance and gather intelligence for the increasingly independent Iraqi Air Force. ATK moved swiftly, fielding a prototype for live-fire testing in just 11 months.

The first AC-208 debuted in 2009, with the more modern Eliminator that entered service in 2017 commonly referred to as the “Block II” iteration. It’s already seen service in the aforementioned Middle Eastern nations, as well as Argentina, Honduras, Kenya, Lebanon, Mauritania, Niger, and Yemen. Reports clearly indicate that deals to purchase these aircraft are brokered by the United States and Air Force personnel have been used to train pilots to operate AC-208s in their respective nations, but for the most part, acquisition and training related to the AC-208 Eliminator tends to fly under the radar.

According to the U.S. Air Force, all they’ll officially acknowledge is that the branch itself does not own any AC-208 Combat Caravans. News reports about these unusual Cessnas prowling the skies over nations like Iraq, lofting Hellfire missiles at bad guys, don’t crop up very often–but that doesn’t mean the AC-208 doesn’t get into its fair share of scraps.

The AC-208 got its first taste of combat in 2014, when the Iraqi military used the Cessna to launch Hellfire missiles at ISIS targets throughout Fallujah and Ramadi and they haven’t let up since. In 2018, an Iraqi AC-208 was even shot down by ISIS fighters using anti-aircraft artillery fire.

This article first appeared at Sandboxx News and is being republished due to reader interest.