Cheap Naval Mines Could Bring World Trade to a Halt 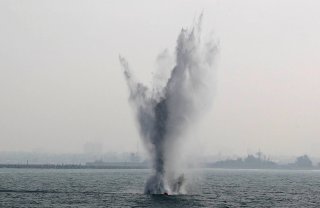 Here's What You Need To Remember: There isn’t even a lot of legal limitation on employing sea mines. Unlike with land mines, there are no treaties in place to ban the use of sea mines, or even a clear definition what counts as one. Given the ubiquity and longevity of mines, there’s plausible deniability in laying a few Soviet-era sea mines here and there.

When you stop and think about it for any length of time, it seems a miracle that the global economy spins on as well as it does. As the spread of the coronavirus Covid-19 has shown, any decent disruption to the global supply chain causes ripples from tourism to iPhone supply that cost billions. Nevertheless, there’s a level of resilience in the global economy, and even though predictions are sounding dire, there isn’t quite panic in the streets yet. So, if you really wanted to cause global havoc and cause your enemies to suffer, what would it cost? Billions? Trillions? Or maybe just the price of a second-hand car? Enter the sea mine.

More than 90% of global trade occurs by sea. This makes strategic maritime chokepoints, such as the Strait of Hormuz and Bab el Mandeb in the Middle East, some of the most strategically important patches of water on earth. Close one or two of those down for any length of time, and we’ve got a serious problem on our hands. This fact is not lost on most major players—hence the military patrols, diplomatic negotiations and international conventions in place to try to mitigate risks to these vulnerable spots.

You’d think it would take something pretty expensive and sophisticated to circumvent these controls, but no. A sea mine is cheap, easy to use, and highly effective at blockading chokepoints. The simplest types of sea mines—variations on the classic spiky ball bobbing in the water—cost only a few thousand dollars but can stop shipping in its tracks.

Iran famously mined the Gulf during the Iran–Iraq War in the 1980s for that very reason, and appeared to be repeating similar tactics last year in both mine and torpedo attacks on tankers traversing the Strait of Hormuz as the sabre-rattling with the US heated up. The Houthis in Yemen are doing their own mining in the Red Sea, ostensibly to protect their ports from Saudi attack. However, in recent weeks, an Egyptian fishing boat in the Red Sea reportedly struck a Houthi mine, killing three of its six crew, and there are reports of Houthi-laid mines drifting off from their original sites and heading who knows where.

The effectiveness of sea mines as a strategic tool lies not just in their immediate threat to an individual ship, but in the time and cost that must go into clearing waters suspected of harbouring mines. Such operations, even in a relatively limited area, can take weeks, months or even years. Australian operations to support mine clearance in Kuwait after the first Gulf War in 1991, for example, stretched for almost five months, searched two square kilometres and dealt with 60 mines. For comparison, the Bab el Mandeb chokepoint is 29 kilometres across at its narrowest point and stretches down some 500 kilometres of Yemeni coastline. And the Houthis may have access to hundreds or even thousands of mines.

The Strait of Hormuz is a slightly roomier 39 kilometres across, but with exponentially higher volumes of oil and gas trade squeezing through its narrow waters. If the sea lines of communication of the Middle East were shut for any length of time, the results for the global supply chain could be catastrophic. To put it in perspective, the Kuwaiti mine-clearance operation of a couple of square kilometres took months; Australia’s current strategic oil reserves, which are heavily dependent on Middle Eastern supply via Singapore, would last around 28 days. Even if Australia reached internationally mandated minimum fuel reserves of 90 days, that’s still well short of the time the Kuwait operation took.

There isn’t even a lot of legal limitation on employing sea mines. Unlike with land mines, there are no treaties in place to ban the use of sea mines, or even a clear definition what counts as one. Given the ubiquity and longevity of mines, there’s plausible deniability in laying a few Soviet-era sea mines here and there.

But how likely is it really that someone will employ sea mines to stop the world? If you’re a state reliant on the global supply chain for your own existence, the answer is: not very. Moored or floating mines in the Strait of Hormuz would do as much (or more) damage to Iran’s economy and geopolitical standing as they would to anyone else’s, and Iran’s leadership is well aware of that. Most non-state actors that have access to such mines are hesitant to use them offensively for similar reasons.

But what about someone with nothing to lose, poor impulse control or a dangerous combination of both? An officer of Iran’s Islamic Revolutionary Guard Corps or a Houthi leader with a halfway-decent sense of strategy and self-preservation would probably baulk at more aggressive use of sea mines in high-profile locations. But IRGC Quds Force leader and key regional networker Qassem Soleimani is dead, US President Donald Trump is surrounded by advisers intent on backing Iran into a corner, and Iran’s Houthi partners are on the offensive and have a history of using cheap weaponry to great effect.

This article by Elizabeth White first appeared in the Australian Strategic Policy Insitute’s The Strategist in 2020.