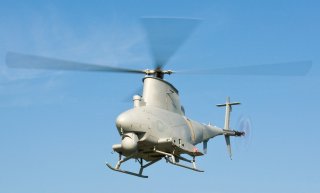 Here's What You Need To Remember: The U.S. Navy FireScout is a vertical-take-off-and-landing maritime drone able to launch from a Littoral Combat Ship or DDG 51 destroyer. Not only does the U.S. FireScout conduct forward targeting and surveillance, but the platform has also been configured with special surface-oriented countermine technologies.

Once again, a Chinese weapons platform looks nearly identical to a U.S. system built several years prior. While the particular technological inspiration, specs of design engineering of China’s new unmanned helicopter may not be known, any quick look at the aircraft immediately reveals that it looks almost identical to the U.S. Navy’s FireScout drone.

“During the 15-minute flight, the drone completed a series of tests including climbing, hovering, rotating and other operations maneuvers, before steadily landing,” the Global Times states.

The AR-500C is a rounded helicopter with a sensor beneath the nose, a horizontal structure on the tail and a single rotor blade on the top. These characteristics appear nearly identical to the configuration of the U.S. FireScout drone. The Chinese paper adds that the high altitude drone will be able to perform risky missions in the mountainous regions along the China-India border. The AR-500C can carry a payload of 80 kilograms and deliver supplies in high-risk, high altitude areas, according to the report.

However, an external resemblance, while significant, suggests little or nothing about the mission scope, networking or sensor capabilities of the Chinese prototype, raising questions as to whether there are any ways in which it might prove comparable to the FireScout in terms of performance.

The U.S. Navy FireScout is a vertical-take-off-and-landing maritime drone able to launch from a Littoral Combat Ship or DDG 51 destroyer. Not only does the U.S. FireScout conduct forward targeting and surveillance, but the platform has also been configured with special surface-oriented countermine technologies.

The Fire Scout has been both deploying and conducting training missions onboard Navy Littoral Combat Ships (LCS) for several years. LCS’ Fire Scout drone is an indispensable part of the ship’s surface, countermine and anti-submarine warfare missions; it is equipped with advanced mine-hunting sensors, aerial surface scanners and target-locating EO/IR cameras. The networking is intended to expand not just to ship command and control but other nodes involved in maritime warfare scenarios such as other surface ships, aircraft or even small unmanned surface vehicles.

Given that the Navy’s Littoral Combat Ship is engineered to use its shallow draft, speed and maneuverability to conduct combat operations in littoral waters near enemy coastlines, having an improved technological capacity to find and detect enemy mines and submarines near the surface expands its mission envelope and provides needed protection for offensive ship operations.The 31-foot long Fire Scout can fly at airspeeds up to 110 knots and reach altitudes of 20,000 feet; the aircraft weighs 3,150 pounds at its maximum take-off weight and is powered by one Rolls-Royce heavy fuel turboshaft engine, Navy officials said.

The Fire Scout has an electro-optical/infrared sensor called Bright Star 2, which has laser range-finding and laser designation, Navy developers said. The MQ-8B Fire Scout can stay up on a mission for up to five hours and also uses Automatic Identification System, or AIS, technology to help locate and identify ships. The Navy has also been integrating a new maritime search radar to its larger Fire Scout variant—the MQ-8C—in order to extend its ISR capacity and provide better targeting support to nearby offensive operations. The existing electro-optical and infrared cameras on the Fire Scout have a range of six-to-ten miles.