China’s Long-Range Missiles Are One Tough Problem to Solve 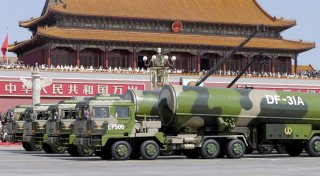 In our quest for an absolute qualitative edge, we’ve forgotten that quantity has a quality all its own. Our dependence on small numbers of exquisite platforms will make it difficult to sustain high-intensity operations, particularly if we’re confronting a major-power adversary such as China. And the lack of range of those platforms accentuates that risk. Addressing that challenge will demand an urgent rethink of how defence capability is developed and acquired and a fundamental paradigm shift. We face a much more dangerous strategic outlook than has been the case for decades, at the centre of which is the prospect of war with China.

Australian defence planners didn’t consider preparing for a major-power war in our region to be a priority until the release of the 2020 defence strategic update. As that document makes clear, an assumption of 10 years’ strategic warning time is no longer appropriate for defence capability planning. The possibility of Chinese military operations against Taiwan—perhaps within the next five or six years—demands that Australian defence planners begin thinking about the implications of a major-power conflict in the Indo-Pacific, which would likely involve Australia alongside the United States.

With that in mind, we need to urgently address a gap in our long-range power-projection capabilities to generate decisive effects well beyond the air–sea gap. That hasn’t really been a significant issue before. Expeditionary air operations with host-nation support, such as those over Syria and Iraq in Operation Okra, were highly effective, but they occurred in a largely uncontested operational environment. Emerging operational challenges in the Indo-Pacific are markedly different and far more challenging than the skies over Syria.

The 2020 force structure plan doesn’t really address the gap, at least in terms of providing an offensive strike capability with numbers and range sufficient to respond to our current strategic predicament. The Defence Department is making some good decisions, though. The acquisition of 200 AGM-158C long-range anti-ship missiles, or LRASMs, for the F/A-18F Super Hornets, and eventually the P-8A Poseidons, will considerably enhance the air force’s anti-surface warfare capability, replacing the largely obsolete Harpoon anti-ship missiles. The force structure plan and the 2021–22 defence portfolio budget statements mention the acquisition of 1,500-kilometre range BGM-109 Block IV Tomahawk land attack missiles for land and maritime strike from the navy’s Hobart-class air warfare destroyers and Hunter-class future frigates.

Hypersonic weapons are also on the horizon, and Australia and the US are now collaborating under the SCIFiRE program to that end, but the timelines for introducing hypersonic weapons are vague. The force structure plan also notes the importance of autonomous systems and ‘teaming air vehicles’, with Boeing Australia now developing the ‘loyal wingman’ drone as part of its Airpower Teaming System. But that’s a developmental program, and while the air force is supporting it, it hasn’t yet committed to funding its acquisition.

The Block IV Tomahawks are a navy capability and may not be introduced in significant numbers, and hypersonic weapons aren’t likely to appear until much later in the decade. So, for the next five years the air force will be left with little long-range strike potential, other than the LRASMs, which still depend on launch from short-range tactical platforms. Those in turn depend either on host-nation support closer to the fight or on tankers that can’t operate in highly contested airspace. And even if tanker support is available, the challenge of insufficient range persists. ASPI’s Marcus Hellyer has noted that tankers don’t necessarily extend the reach of platforms like the Super Hornet, or even the JSF, to key operational areas relevant to a crisis in the Taiwan Strait. We’re still left with a strike gap.

Having long-range offensive strike must be matched with effective defence to meet the threat posed by Chinese air and missile capabilities in the event of a Taiwan Strait crisis. China’s H-6N bombers can launch CH-AS-X-13 air-launched ballistic missiles from near Hainan Island, and their 3,000-kilometre range would allow targeting of bases across northern Australia. If China were to deploy its 4,000-kilometre range ground-based DF-26 intermediate-range ballistic missiles to Hainan, they could also strike our northern bases.

Acquiring ballistic missile defence systems isn’t necessarily the complete answer. They don’t have a great record of success in defeating simulated attacks by lesser threats such as North Korea. It’s questionable how effective a missile defence network in our north, perhaps comprising sea-based SM-3 interceptors aboard the Hobart air warfare destroyers and land-based systems such as Aegis Ashore, would be against a more sophisticated Chinese missile threat. In any case, China’s further development of hypersonic glide vehicles such as the DF-17 might ultimately allow it to circumvent such systems. Betting on missile defence systems now could suck up precious resources with little gain.

Meeting the challenge posed by long-range missiles is a ‘wicked problem’ for Defence. An urgent threat is emerging to which there is no clear response. Investment in systems such as the F-35 isn’t necessarily the answer. Time isn’t on our side, and we need a fast-tracked solution.

The answer, which I’ll explore in a future post, lies in accelerated development and acquisition of greater numbers of innovative autonomous systems, matched with more capable crewed platforms that have greater range, performance and payload than even the F-35. The aim should be to develop a new layer of forward anti-access and area denial, a more resilient and distributed command-and-control architecture that can survive initial blows in a potentially prolonged high-intensity conflict, hardened bases and protected logistics. We would also benefit from building sovereign production chains for combat capability that are located beyond the reach of China’s long-range missiles, for both defence operations and expeditionary operations as part of a coalition.