China and Russia Love Naval Mines: Here’s Why America Should Too 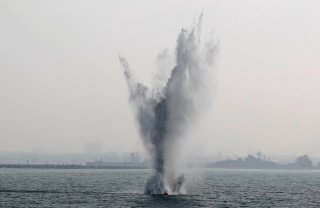 Here's What You Need to Remember: Submarine-launched mobile mines (SLMMs) are a particularly appealing part of the Soviet mine warfare legacy for the Chinese to learn from. In this way, submarines could still attack high value targets, but “do not [themselves] need to enter the dangerous area.”

Russia has long been a leader in naval mine warfare. This method of combat proved its worth in the Russo-Japanese War, and approximately 40,000 mines were deployed by Russian fleets in each of the World Wars. During the Cold War, the Soviets similarly viewed sea mines as an essential asymmetric tool to cope with the superior U.S. Navy. In Beijing, this particular aspect of Russian naval doctrine has attracted more than a little attention. That is logical given that China, like Russia, has a lengthy coastline to defend with extensive shallow bathymetry in proximate waters.

“Sea mines are a dual use offensive/defense asymmetric weapon. They are mainly employed to blockade ports, straits and narrow shipping lanes. At the same time, submarines may undertake long-range offensive operations by laying mines. They can not only be used to annihilate warships, but can also be used to interdict enemy sea lines of communication.” These are the opening lines of one segment in a four-part article series on Russian mine warfare development published in the Chinese naval magazine Naval & Merchant Ships [舰船知识] during 2017. The same introduction notes that, “Experiences and lessons from previous wars indicate that mines can accomplish strategic battles and tactical missions with excellent combat effectiveness and will continue to play an important role in future naval battles [历次战争的经验教训表明水雷可完成战略战役和战术任务具有极佳的作战效果在未来海战中仍将发挥其重要作用].”

A first of the Chinese articles focuses on the advantages of bottom mines [沉底水雷]. Lessons from the Soviet experience in WWII are related to show that anchored mines [锚雷] have low reliability due to current and waves. By contrast, bottom mines are said to be more reliable, harder to find, and much more difficult to sweep. According to this Chinese rendering, the Soviets began to experiment with bottom mines in a serious way in 1942. The first post-war deployment of submarine-laid bottom mines were the Soviet AMD-2 and MLT-3 designs in 1953. Later, Soviet strategists were attracted to aerial deployment of mines, because that method “increased the capability to lay mines rapidly [为提高快速布雷能力].” The first Soviet aerial-deployed bottom mine was the IGDM-500.

Modern Russian bottom mines are part of the MDM series, developed by an institute in St. Petersburg (previously “planning bureau no. 400”), according to this Chinese analysis. Thus, MDM-1 is designed for submarine delivery and therefore has 533mm width. Its length is reported as 2.86m and it is said to have a 960kg explosive charge. That weapon is apparently designed for depths of 90-120m. MDM-2 is somewhat larger and can be laid by surface ship, while MDM-4 and 5 are for aerial deployment. The sensors on these weapons are designed so that they “can avoid … being covered in sand … safeguarding reliability [为避免 …被泥沙掩埋 … 保证可靠性].” Unfortunately, there is some discussion in this article about Soviet development of nuclear-armed bottom mines. The idea, developed in the 1960s, was to target high value assets, such as adversary nuclear submarines, with a kill radius for the mine of up to 2000m. Still, it is explained that this project had “many problems,” and the balance of this particular Chinese article focuses on the Russian development of rocket rising mines [火箭上浮试沉底], as the most modern and lethal type of bottom mine, because the “target has no time to react, decreasing the chance of interference or avoidance.” It is indeed disturbing to see how energetically Chinese naval analysts are employing Russian strategies to counter America’s submarine advantage—an inference that can very reasonably be drawn from the graphics accompanying this Chinese article.

A second article in this 2017 series similarly underlines the importance of sea mines to naval warfare. Referencing the U.S. Navy’s 1945 mine warfare campaign against Japan, this second Chinese analysis from the same series argues that this factor (alongside of American submarines deploying torpedoes) was as or more important than the atomic bomb in forcing Japan’s “collapse.” Looking at the problems coalition forces faced in the Persian Gulf against Iran and Iraq’s primitive mine warfare forces, this Chinese analysis says the potential for a country wielding modern, offensive mine warfare forces is “apparent [可见].” The focus of this particular article is on “Soviet/Russian submarine launched mobile mines [苏/俄潜用自航水雷].”

These Chinese naval strategists conclude that submarine deployed mines have the highest effectiveness. That calculation is based on Soviet data from WWII that concluded submarine deployed mines sank one ship for every 19.5 mines laid, versus 50 aerial-deployed mines per sinking, and more than 150 for surface ship deployment. Their understanding of this phenomenon is relatively simple and logical: “surface ships and aircraft cannot rely on stealth when planting mines and are easily discovered by the adversary … [水面舰艇和飞机不能隐蔽布设水雷很容易被敌方发现].” According to this report, Tsarist Russia produced the first submarine optimized for mine-laying in July 1915. During the Cold War, Moscow built a project 632 mine-laying submarine and various later plans included the 18,000 ton project 717 nuclear submarine that could accommodate 252 sea mines, but apparently it was never built due to other priorities.

Submarine-launched mobile mines (SLMMs) are a particularly appealing part of the Soviet mine warfare legacy for the Chinese to learn from. In this way, submarines could still attack high value targets, but “do not [themselves] need to enter the dangerous area.” Indeed, Chinese submarines, like Soviet submarines during the Cold War, are confronting a U.S. Navy (and its allies) with “very formidable anti-submarine warfare forces [强大反潜兵力].” The piece notes the Russian SMDM-2 has 50km range and can even accommodate a nuclear warhead. It also discusses an export version SMDM-3 with the following characteristics: length of 6.1m, weight of 1400kg, maximum depth of 120m, and the maximum range of 40km. In Soviet doctrine, such weapons were expected to deliver “surprise” [突然性] and also enable “long-range combat against sea lanes” [远洋破交作战].

All the discussion in the American press of late about the USS Theodore Roosevelt’s somewhat unfortunate deployment to the South China Sea a few weeks back is a distraction from the main strategic issues in the Asia-Pacific. Aircraft carriers are indeed potent symbols, but in reality do not have a major part to play in the strategic balance with China. To the contrary, it is actually the undersea battle that will likely prove decisive, as the Chinese seem to fully understand. A starring role in that battle under the waves is likely to be played by the traditional naval weapon of the weak—the humble sea mine.

Lyle J. Goldstein is Research Professor in the China Maritime Studies Institute (CMSI) at the United States Naval War College in Newport, RI. In addition to Chinese, he also speaks Russian and he is also an affiliate of the new Russia Maritime Studies Institute (RMSI) at Naval War College. You can reach him at [email protected]. The opinions in his columns are entirely his own and do not reflect the official assessments of the U.S. Navy or any other agency of the U.S. government. This article first appeared last year.

Naval Mines Could Be Iran's Secret Weapon in a War Against the U.S. Navy