China Beware: The Air Force's Skyborg Program Is Getting Smarter 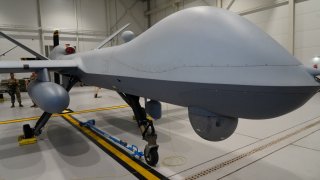 Here's What You Need to Remember: The United States Air Force successfully conducted an unmanned test flight of a General Atomics Avenger drone—controlled not by a pilot on the ground, but rather by the Skyborg autonomy core system. The

The artificial intelligence pilot is steadily gaining experience and expanding the number of drones it can fly.

The United States Air Force successfully conducted an unmanned test flight of a General Atomics Avenger drone—controlled not by a pilot on the ground, but rather by the Skyborg autonomy core system. The flight came several months after the Skyborg technology flew a Kratos UTAP-22 Mako drone, and marked the second kind of aircraft that the autonomous piloting program is able to fly.

“This type of operational experimentation enables the Air Force to raise the bar on new capabilities, made possible by emerging technologies,” Air Force Brig. Gen. Dale White explained in an Air Force press release about the recent flight. “And this flight is a key milestone in achieving that goal.”

The Air Force Skyborg effort is in essence a complex artificial intelligence system that hopes to eventually allow low-cost, unmanned aerial platforms to fly in tandem with manned fighters. Having an autonomous, intelligent plane in the air alongside other Air Force platforms is of obvious benefit: by flying ahead of manned airplanes, unmanned and expendable airframes can be placed in high-risk airspace to fly scout and reconnaissance sorties to evaluate potential threats—or even, in theory, to pull the trigger on enemy aircraft or ground installations.

The Skyborg program however would like to take unmanned flight a step further. Rather than flying just one or several autonomous airplanes, the Air Force hopes that Skyborg could enable larger swarms of unmanned aircraft to fly in coordinated teams rather than just solo multiplying their combat effectiveness.

The General Atomics Avenger drone is one  of the company’s most advanced—and though company material on the drone does not state it explicitly—is thought to incorporate some radar-mitigating stealth features into its airframe. The Avenger utilizes a serpentine air intake duct intended to hide the engine's compressor blades from enemy radar and reduce potential radar return. In addition, the Avenger’s fuselage appears to be contoured in a stealthy fashion, and incorporates rectangular exhaust nozzles which are useful for preserving rearward stealth.

Air Force material on Skyborg is careful to state that Skyborg-flown unmanned systems would compliment rather than replace manned pilots, but will “provide them [pilots] with key data to support rapid, informed decisions.” In this way, Skyborg could “provide manned teammates with greater situational awareness and survivability during combat missions.”

So while the Air Force Skyborg autonomy core system is still in its infancy, the artificial intelligence piloting program is rapidly gaining experience, and could fly alongside manned pilots in the not-so-distant future.