China Claims It Can Track The F-22 Raptor, But That's Not A Big Deal 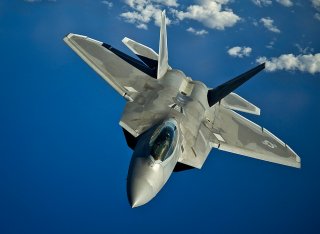 Here's What You Need To Remember: Stealthy tactical aircraft must operate alongside electronic attack platforms like Boeing EA-18G Growler. It is also why the Pentagon has been shoring up American investments in electronic and cyber warfare. As one Air Force official explained, stealth and electronic attack always have a synergistic relationship because detection is about the signal-to-noise ratio. Low observables reduce the signal, while electronic attack increases the noise.

State-run Chinese media claimed back in 2016 that the People’s Liberation Army is able to track the U.S. Air Force’s Lockheed Martin F-22 Raptor stealth fighters over the East China Sea. While the Chinese report might be easily dismissed as propaganda—it is not beyond the realm of possibility. In fact—it’s very possible that China can track the Raptor. Stealth is not a cloak of invisibility, after all. Stealth technology simply delays detection and tracking.

That effectively means that stealthy tactical aircraft must operate alongside electronic attack platforms like Boeing EA-18G Growler. It is also why the Pentagon has been shoring up American investments in electronic and cyber warfare. As one Air Force official explained, stealth and electronic attack always have a synergistic relationship because detection is about the signal-to-noise ratio. Low observables reduce the signal, while electronic attack increases the noise. “Any big picture plan, looking forward, to deal with emerging A2/AD threats will address both sides of that equation,” he said.