The China-EU Trade Agreement Poses a Major Challenge for Biden 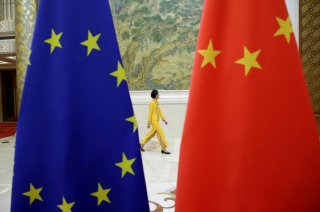 So much for the effusions about a new era of transatlantic cooperation and unity. Despite a public intervention by the incoming Joe Biden administration urging it to delay, the European Union (EU) has decided to give Beijing a major victory by signing a long-debated investment agreement with China’s ruling Communist Party. This decision represented a snub to Biden and his soon-to-be national security adviser Jake Sullivan, who had tweeted earlier that the new administration would “welcome early consultations with our European partners on our common concerns about China’s economic practices.” It was a clear request to first forge a common front against the Chinese authoritarian, mercantilist state.

Instead, on December 30, EU officials, led in reality by German Chancellor Angela Merkel, abetted Chinese ambitions with a video conference graced by a triumphant Xi Jinping, signaling an agreement “in principle” to ratify the investment treaty. Merkel has been the driving force behind the hurry-up drive to conclude the negotiations before the conclusion of Germany’s presidency of the European Council on December 31. For Merkel, “good strategic relations with China” — and protection for Germany’s automobile companies — trumped quibbles about timing and transatlantic unity with regard to Beijing. The deal comes only weeks after Brussels had publicly urged the US to join an alliance against “authoritarian powers” and to combine forces against the “strategic challenge” of China. Yet in further contradiction of this plea, Merkel and French President Emmanuel Macron also offered to independently go to Beijing for further talks.

EU negotiators claimed they aimed for a “level playing field” with China. And in order to complete the deal, Beijing did make a few concessions. But one must remember that while the EU has instituted some restrictions on Chinese state-subsidized investments, generally it has an open investment market. Beijing on the other hand starts with a largely closed investment market, so the new agreement with the EU represents merely a few carefully culled sectors. That said, the EU did achieve the promise of no joint venture requirements for autos and financial services, openings in health services, cloud computing, electric vehicles, and auxiliary transport services. In addition, Beijing has promised more transparency on subsidies, though not to end them.

On labor and human rights, Beijing offered unenforceable promises. It stated it would “make continued and sustained efforts” to ratify International Labor Organization conventions on forced labor. Critics were not mollified. As noted by European Parliament member Raphaël Glucksmann, enforcement, verification, and implementation of labor rules were left open. Echoing other dissenters, he queried: “[Are] the commission and the member states content with words, with promises which do not commit the Chinese leaders in any way?”  Actually, the Biden administration has been circumspect in its reaction, but EU leaders are defensive — and defiant. In an anonymous statement to The Financial Times, an EU official complained: “They believe they can tell their allies what to do instead of being a little bit humble and trying to solve bilateral [US-EU] problems first.”

When the formal text is agreed on, the agreement must be ratified by the European Parliament and the European Council. This process will extend well into 2021.

The new pact came during a week when Beijing jailed a reporter for chronicling China’s bungled handling of COVID-19 and the sentencing of Hong Kong protest leaders for attempting to flee the city. At the signing ceremony for the investment deal, European Council President Ursula von der Leyen argued that the agreement “upholds our values.” If that is indeed the case, President Biden has his work cut out for him.