China Has a National Economic Growth Goal. Why Can't America? 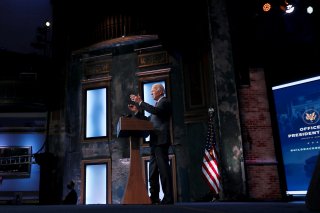 Chinese President Xi Jinping recently set a goal of doubling the size of China’s economy by 2035. To hit that target, the Financial Times calculates, the Chinese economy must generate average annual GDP growth of just over 4.7 percent over the next 15 years vs. 6.7 percent over the previous five years. Maybe that seems pretty doable. But the FT argues the task is harder than it might seem due to the nation’s debt and demographic problems.

That said, I like the idea of a nation’s leader not only setting a growth target, but making a big deal of it. Of course, Washington does put forward growth forecasts. For instance: In the 2020 Economic Report of the President — released in the early days of the Great Pandemic last February — the Trump White House said it saw real GDP growing by 3.0 percent each year over the next four years. Now based on the economy’s average 3.2 percent growth rate since World War II, that forecast might not seem so ambitious. But the economy has not done nearly as well lately, owing to slower labor force and productivity growth. There haven’t been four consecutive years of 3 percent growth or higher since the latter half of the 1990s boom. Achieving that would go a long way toward making a second Roaring ‘20s.

And maybe that happens — although not in the way the Trump White House anticipated. It wasn’t expecting 2021-2024 would feature a strong post-pandemic rebound from a mini-depression. But after that brief blip, most forecasts expect a return to a slower growth trend of around 2 percent or so. And longer term? Not even that fast. From the Congressional Budget Office: “In CBO’s extended baseline projections, growth in potential (or maximum sustainable) GDP over the next 30 years is slower than it has been over the past 50 years. From 2020 to 2050, real potential GDP increases at an average rate of 1.6 percent per year, whereas it grew at an average annual rate of 2.8 percent from 1969 to 2019.” That’s a big difference, a $30 trillion economy in 2050 vs. $44 trillion that year.

So I guess I would love to see Joe Biden announce in January that it’s the goal of US economic policy to grow at least as fast in the future as in the past. And we’re talking long-term, sustainable growth from faster productivity growth driven by technological progress — not short-term fiscal stimulus. I would like that to be a critical lens through which many policy areas are analyzed and addressed: taxes, regulation, infrastructure, immigration, trade, science research. Not only would faster productivity and economic growth likely mean faster wage growth and a lighter debt burden, but it would give a richer and more technologically advanced America greater capacity to address big problems. And as we’ve been reminded in 2020, it’s good to be a rich and technologically advanced country — especially when unexpected problems arise.