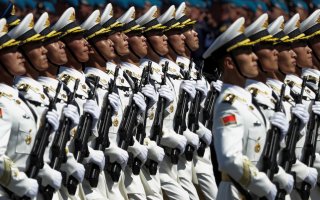 Here's What You Need to Know: The weapon could likely be deployed to troops stationed in the mountainous region along the border with India.

(This article first appeared in January.)

A common misconception about military small arms is that a “heavy” weapon must be heavier in terms of weight. This isn’t exactly the case, and when it comes to machine guns it isn’t the mass, but rather the rounds it fires and how such a weapon is employed. In some cases, a heavy machine gun doesn’t even need to be all that heavy and now the Chinese People’s Liberation Army (PLA) has reportedly adopted a new heavy machine gun that is among the lightest in service.

While its exact designation isn’t known, the new 12.7mm caliber heavy machine gun is reported to be of a similar structural design to the QJZ-89—also known as the Type 89—the current heavy machine gun employed with the PLA. Recent news footage on China Central Television (CCTV) showed multiple Chinese PLA Marine Corps personnel carrying the weapon during amphibious landing and control exercises in the South China’s Guangdong Province.

According to reports from the Global Times news outlet, there are key differences including the aiming sight and cartridge box, but the biggest difference may be in the weight. The new weapon was likely developed from the QJZ-38, which weighs twenty-six kilograms including 17.5 kg for the gun itself and another 8.5 kg for the tripod. The new firearm, which is reported to utilize composite materials, could weigh in at just twenty kg (forty-four pounds).

That would make the unnamed weapon the lightest 12.7mm heavy machine gun in the world, and this could provide greater mobility for soldiers on the move. It could be carried by a single soldier and provide squads with the ability to enable strong suppressive fire on the battlefield while advancing. That is something that is otherwise difficult to achieve given the mass of most heavy machine guns.

Seen in amphibious landings, the weapon could likely be deployed to troops stationed in the mountainous region along the border with India, where both sides have dug in for the long winter.

“This kind of super-light heavy machine gun could be particularly useful in high-altitude and mountainous regions, or in amphibious landings and fast-reaction operations, when heavier machine guns might prove to be difficult to maneuver with,” a Chinese military analyst source told the Global Times.

The 12.7x108mm cartridge was developed by the former Soviet Union in 1934 to create a cartridge that was similar to the German 13.2mm TuF anti-tank round or the American .50 caliber Browning machine gun round. It was utilized by the former Warsaw Pact nations and is still in use with the militaries of Russia and China with heavy machine guns but also as an anti-material rifle cartridge. It can be used to destroy unarmored vehicles, to penetrate light armored vehicles and can be used against other targets such as radar, transmitters and vehicle engine blocks. The round will ignite gasoline and even diesel fuel.