China Has Way Too Much Power Over Zoom. These Activists Learned the Hard Way. 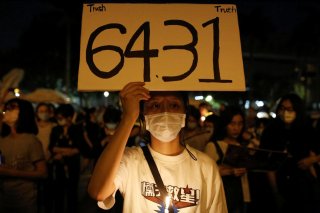 Zoom confirmed Wednesday evening that the video conferencing company removed a U.S.-based account after it commemorated the Tiananmen Square Massacre.

Zoom removed the account to comply with local law inside China, which prohibits discussion about the three-decade-old massacre, the company said.

The company acknowledged removing the account of activist Zhou Fengsuo, a former student leader of the Tiananmen protests in 1989 who organized the May 31 event through a paid Zoom account associated with a nonprofit he founded called Humanitarian China.

Zoom’s move reveals a huge problem the U.S. has in dealing with China’s massive censorship network, according to Zhou. “I was shocked and disappointed over what happened,” Zhou told The New York Times on Thursday.

Roughly 250 people based in the United States attended the event before Zoom shut down Zhou’s account on June 7.

“Just like any global company, we must comply with applicable laws in the jurisdictions where we operate,” a Zoom spokesperson said in a statement Wednesday, according to Axios, which initially reported on the removal.

“When a meeting is held across different countries, the participants within those countries are required to comply with their respective local laws,” the spokesperson added. “We aim to limit the actions we take to those necessary to comply with local law and continuously review and improve our process on these matters. We have reactivated the US-based account.”

Zoom has not replied to the Daily Caller News Foundation’s request for comment addressing why the company reinstated Zhou despite initially removing him over concerns related to China law. Zhou, meanwhile, wants answers.

“We can’t stand that an American company put Chinese-style restrictions on users in the U.S.,” he told the Times. The deeper problem is China’s byzantine censorship network, called the Great Firewall, which “enslaves the Chinese people” and is “the fatal flaw for an open and free internet,” Zhou noted.

China’s Great Firewall allows the country’s officials to control what people see and read online, effectively sheltering Chinese citizens from observing what’s going on abroad. Foreign companies must abide by strict censorship rules dictating what can be said. They’re required to provide data to censors who police China’s version of the internet.

Zoom began allowing unpaid users in China to join meetings but not host them. Such a change paved the way for a user in the U.S. to host a meeting allowing users inside China to join.  Zhou said he advertised the Tiananmen event on Chinese social media two days before it occurred.

Zoom faces growing scrutiny regarding its ties to China, which prohibits discussion of the protest and the government’s violent response to the demonstrations. The company acknowledged in April routing calls through Chinese servers.

Foreign policy analysts argue that Zoom’s work inside China is making the company susceptible to manipulation.

“Encryption experts have said its security is dubious, and it has relied on programmers and encryption keys located in China,” Christian Whiton, a senior fellow for strategy and trade at the Center for National Interest, told the Daily Caller News Foundation. “[I]t is now clear that the company’s reliance on China means it is susceptible to Chinese political pressure.”

Whiton added: “This episode will only deepen suspicions about Zoom the company hoped to overcome.”

Other experts are making similar observations. China is prepared to force companies like Zoom into self-censoring to avoid coming down too hard on them in a publicly, according to Dean Cheng, a Chinese political and security affairs expert at the Heritage Foundation.

“From the Chinese government’s perspective it’s not just about Zoom,” Cheng told the DCNF. “Ideally from the Chinese perspective, the next company that comes along won’t even issue licenses and accounts to known dissidents,” he added, referring to China potentially pressuring Zoom over Zhou’s account.

“For China, self-censorship — people choosing not to challenged China from the get-go — is much better than China having to crack the whip,” Cheng concluded.