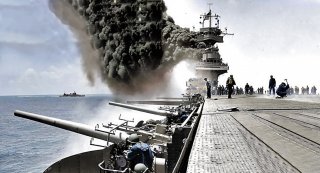 Here's What You Need to Remember: China likely recognizes that once wars are started with America, even when militarily successful, they may be extremely difficult to end.

Late springtime is a fitting time to contemplate the origins of U.S. maritime supremacy. Over a period of about twenty-four hours in June 1942, U.S. naval aviators turned the whole course of history by putting the Imperial Japanese Navy’s four premier flattops on the bottom. This victory can be attributed in roughly equal parts to strategic acumen, code-breaking genius, dive-bombing technology, precision training, and luck, as well as no small amount of valor and sacrifice.

To take but one example, consider Lt. Cdr. Lance Edward “Lem” Massey. A native of Syracuse, New York, he graduated from the U.S. Naval Academy in 1930. He had the extraordinary distinction of leading the very first aerial torpedo attack in U.S. Navy history, as his squadron struck an early blow against the sweeping tide of Japanese victories near the Kwajalein Atoll in February 1942. On that fateful June 4 morning, he boldly led his squadron into the maelstrom of the Midway battle, charging in to attack the Japanese carrier Hiryu. “[Another U.S. pilot] . . . saw the skipper’s plane erupt into a big ball of flame. Massey stood up in his open cockpit, with one foot on the stub wing and the other on the seat, as his TBD [Avenger] dropped toward the water 250 feet below. The skipper did not have the altitude to survive the jump from his flaming wreck.” Of course, those familiar with this battle know well that the torpedo-laden Avengers’ sacrifice was not in vain as they successfully diverted the Japanese carriers’ fighter cover, allowing the U.S. Devastator dive bombers a clear path to wreak their fury against the crown jewels of the Japanese Navy—an act of sweet revenge for the Pearl Harbor attack some six months prior.

Today, on the other side of the Pacific, the Midway battle seems to have become a rather hot study topic in contemporary Chinese naval circles. Maybe this is not particularly surprising given that Beijing has just launched its second aircraft carrier and is thought to be hard at work on the third. A long article in the Chinese naval magazine Modern Ships [现代舰船] published by the enormous ship-building conglomerate CSIC, is especially interesting. The focus of the piece, entitled “The Road to Midway Island” [通向中途岛之路] does not take up the tactics, the technologies, nor the heroism involved, but undertakes a strictly disciplined examination of the planning choices made by the Japanese military leadership during the spring of 1942. Thus, among the ingredients that produced the miracle at Midway, this Chinese analysis is focused on “strategic acumen,” or lack thereof, and how Tokyo squandered such a militarily favorable position so quickly.

The analysis begins by making the point that Tokyo’s rapid conquest of all of Southeast Asia had come at a startlingly low cost. Victory had come so easily [赢得这些胜利是如此地轻而易举] and the obvious natural question was “What next?” [下一步 . . . 怎么半]. In March 1942, the Japanese Navy was said to be examining two vectors of attack: either south to Australia or north to the Aleutians. The Japanese Navy’s chief planner and mastermind of the Pearl Harbor attack, Adm. Isoroku Yamamoto, has apparently also ordered an investigation of the feasibility for an invasion of Hawaii. Curiously, the Japanese Navy set off at that time on another project altogether deep in the Indian Ocean: Ceylon [锡兰] or Sri Lanka. As this analysis outlines, Tokyo’s goals in the Indian Ocean were not completely far-fetched. The Japanese Navy’s surge toward India was intended to menace Britain, perhaps even encouraging the people of the Raj to rise up against their colonial masters, while simultaneously impressing Germany and presenting the real possibility of the Axis powers jointly carving up the oil-rich Persian Gulf. The invasion of Australia was never seriously contemplated in Tokyo, according to this analysis, since such a campaign was evaluated to require at least two hundred thousand troops, as well as a third of Japan’s sparse shipping resources. The Chinese author notes that the Japanese Army had no interest in supporting the Japanese Navy with various operation around the Asia-Pacific region, because Tokyo’s ground forces remained obsessed with campaigns on the Asian mainland with their sites fixated, in particular, on the conquest of Siberia [西伯利亚]. While the Japanese Navy recognized that an invasion of Hawaii would eliminate America’s most important strong point in the Pacific and greatly hinder its opportunities to strike at Japan, this author emphasizes the problems posed by the “passive . . . uncooperative attitude” [消极 . . . 不合作态度] of the Japanese Army that was unwilling to play a “supporting role” [当配角].

While Admiral Yamamoto could operate with a kind of “halo” [光环] around his head as the hero of Pearl Harbor, the Japanese Navy leadership did, according to this analysis, recognize the major failures of the December 7 surprise attack to destroy Hawaii’s oil storage facilities, as well as its ship-repair wharves. However, it was most disappointing, of course, to have missed the opportunity to eliminate the U.S. aircraft carriers. After the Doolittle Raid [杜利特空袭] struck the Japanese homeland directly, this issue apparently became acute [当务之急] for the Japanese Navy leadership. Moreover, military leaders in Tokyo clearly grasped the urgency to achieve final victory sooner rather than later since eleven aircraft carriers were being built in the United States versus just one in Japan. Still, there were apparently many Japanese military leaders who advised against the Midway operation. The Chinese analysis related how these skeptics warned that air cover was insufficient, and the United States might even have the advantage in the air [空中优势很可能在美军手里]. The island of Midway itself provided next to nothing in terms of natural resources, so occupying it would strain Japanese shipping resources and the mid-Pacific was said to be teeming with American submarines. Finally, the critics suggested that Midway Island would be hard to defend since it was too small to base significant forces. But this analysis seems to suggest that Yamamoto may still have held out the hope of invading Hawaii, perhaps even in the fall of 1942 (following upon a victory at Midway). After all, it is explained that if Japan had conquered Hawaii, the four thousand kilometers ocean expanse would have been sufficient distance to cause the United States to have enormous difficulties [four thousand 公里的茫茫大海. 仅仅距离本身就足以制造巨大的困难] in organizing a counterattack against Japan’s new bastion [堡垒] in the Pacific.

However, prior to that ambitious operation, the Japanese Navy had to destroy the American carrier forces and for this, they planned a special “must save” [必救] or baiting operation that would sufficiently threaten Hawaii, so as to force the American big decks to come out for a fight. In an attempt to fool the Americans, the Japanese Navy command adopted a strategy of trying to “divide the attention of the U.S. forces” [分散美军的注意] by organizing the Japanese naval forces into four independent strike groups. But this Chinese analysis surmises that “the battle plan was exceedingly complex” [极为复杂的作战计划] and the independent groups were not capable of mutual support. For all the discussion of strategy, there is little explanation regarding the progress of the actual battle. It is mentioned that Japanese naval intelligence failed to realize that the USS Yorktown, damaged in the Battle of the Coral Sea, could be repaired so quickly and sent back into battle. In the end, this Chinese assessment concludes that the Japanese forces engaged (four carriers/227 aircraft) did not decisively outnumber the U.S. forces (three carriers/234 aircraft) so that the Battle of Midway amounted to an “excessive risk” [过多的风险].

Perhaps the most interesting part of the whole Chinese assessment is a few sentences near the end when the issue of war termination from the Japanese perspective is broached. It is noted that the entire goal of the Japanese war effort in spring 1942 was how to get the Americans to engage in “negotiations to end the war.” [停战谈判] Here, there is the ironic observation that the more victories that the Japanese side was able to achieve, the less palatable was the idea in the United States that Washington could negotiate with Tokyo. This point then shows a recognition that once wars are started, even when militarily successful, they may be extremely difficult to end.

To take the above point a step further, we may hope that Chinese strategists realize that once Americans are angered or threatened, they will make the necessary sacrifices and face the requisite burdens to achieve victory. But there are, to be sure, many other potential lessons that Chinese military planners could take away from this analysis with respect to the perils of interservice rivalry, the imperative to have civilian shipping transport resources as a strategic reserve, and the need to avoid strategic distractions (e.g. Sri Lanka) that might divert resources from the main effort. Indeed, one of the more disturbing lessons that could hypothetically emerge from this Chinese study of Midway is the conclusion that the Japanese failed to build and concentrate sufficient effort against Hawaii. While the geography has not changed so that such a conclusion is indeed plausible, we should hope in the era of nuclear weaponry that Chinese strategists are more sophisticated—and maybe even enlightened enough—to realize that similar exertions today would likely lead swiftly to the apocalypse.