China Tested its 'Carrier Killer' Missiles in the Pitch-Black 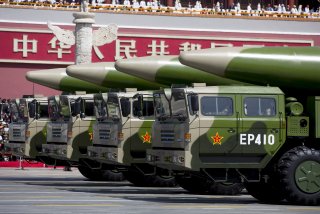 Here's What You Need to Remember: Night maneuvers, the Chinese report said, introduce additional tactical variables such as the need to carefully manage any signal or signature which might compromise a launch position.

The Chinese military fired off one of its much-hyped “carrier-killer” missiles at night. This was part of an effort to refine guidance systems and targeting technologies for more challenging combat circumstances such as tracking targets without daylight.

“After launching a first wave of missile strikes, the troops received orders to relocate, reload and start a second wave of strikes. The drills also simulated a hostile attack on a launch position, and the troops had to maneuver to a backup launch location,” the Chinese report said.

The Chinese forces also, as cited in the report, practiced maneuver operations under hostile fire to preserve an ability to attack while under hostile fire. These circumstances are one of several reasons the Chinese military places such value upon operating mobile launchers as they can maneuver to avoid being tracked or subject to air attack.

Night maneuvers, the Chinese report said, introduce additional tactical variables such as the need to carefully manage any signal or signature which might compromise a launch position.

“Night launches are more challenging than in the day due to lower visibility, and artificial light must be controlled to a low level in order not to expose the launch position,” the Chinese paper rights.

Defending against an incoming anti-ship missile, however, might not be as challenging as firing one and achieving the needed guidance to strike a target at night. Not only is there likely to be some kind of light signature emerging from a launch which could potentially be tracked by drones, surface ships, or even satellites depending upon its size and duration. But anti-ship missiles such as the DF-26 present a significant heat signature that is detectable at night with long-range infrared sensors coming from drones, helicopters, or surface ships in position to transmit tracking data for ship defenders.

Along with heat and light indicators, an approaching DF-26 would also present some kind of radio frequency or electronic signature potentially detectable by passive electronic warfare sensors or other kinds of detection technologies. Electromagnetic signals of course operate independently of visible light but still travel at the speed of light, something which could speed up detection and tracking of arriving DF-26 missiles approaching a carrier.  The DF-26, a weapon that is regularly shot off by China, can reportedly travel distances as far as 2000 nautical miles to destroy maneuvering targets at sea.

Kris Osborn is the Defense Editor for the National Interest. Osborn previously served at the Pentagon as a Highly Qualified Expert with the Office of the Assistant Secretary of the Army—Acquisition, Logistics & Technology. Osborn has also worked as an anchor and on-air military specialist at national TV networks. He has appeared as a guest military expert on Fox News, MSNBC, The Military Channel, and The History Channel. He also has a Master's Degree in Comparative Literature from Columbia University. This article is being republished due to reader interest.