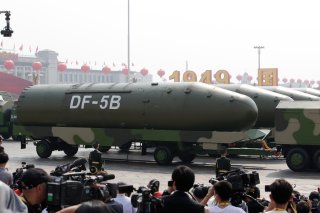 In the face of an increasing torrent of abuse from Beijing, Canberra should seek a much clearer commitment from Washington that its United States ally will retaliate if China launches a missile attack against Australia.

As far as Australia is concerned, the growing torrent of threats and bullying from Beijing mean that we need to have a much clearer understanding from our American ally about extended deterrence—not just nuclear deterrence but also conventional deterrence against Chinese long-range theatre missiles with conventional warheads.

In May, the editor-in-chief of Beijing’s Global Times newspaper, which generally reflects the views of the Chinese Communist Party, threatened Australia with ‘retaliatory punishment’ with missile strikes ‘on the military facilities and relevant key facilities on Australian soil’ if we were to send Australian troops to coordinate with the US and wage war with China over Taiwan.

The specific threat made by Hu Xijin was as follows: ‘China has a strong production capability, including producing additional long-range missiles with conventional warheads that target military objectives in Australia when the situation becomes highly tense.’

The key phrase here is ‘long-range missiles with conventional warheads’. But it’s virtually impossible, even with the most sophisticated intelligence methods, to detect reliably any difference between a missile with a conventional warhead and one with a nuclear warhead. This is made more difficult by the fact that China co-locates its conventional and nuclear theatre missile forces.

But why the emphasis on ’conventional warheads’? This may be Beijing trying to show that it still adheres to its ‘no first use’ declaratory policy on nuclear weapons. But it may also be aimed at restraining any US strikes on China in retaliation for a missile attack on Australia.

However, Beijing is not only naive about how Washington might be prevailed upon to accept the difference between conventional and nuclear strikes. There’s the additional problem that some of the ‘relevant key facilities on Australian soil’ would be important for the US’s understanding of the nature of such a conflict and whether escalation could be controlled. For example, taking out the joint US–Australian intelligence facilities at Pine Gap near Alice Springs might be seen in Washington as an attempt to blind the US to any warnings of deliberate nuclear escalation by Beijing.

During the Cold War, this sort of danger was well understood. In my experience in the late 1970s and 1980s, Moscow made it clear to us that attacks on Pine Gap, Nurrungar and North West Cape would only occur in the context of an all-out nuclear war. The Soviet leaders knew that blinding Washington in the early stages of a nuclear exchange would be a foolish act, not helping any prospects of the management of escalation control.

The problem with Beijing is that it has no experience in high-level nuclear arms negotiation with any other country. It doesn’t understand the value of detailed discussions about nuclear warfighting. This is a dangerous gap in Chinese understanding about war—especially as its strategic nuclear warheads, which number in the low 200s according to the Pentagon, are barely credible as a second-strike capability and its submarines armed with strategic nuclear weapons are noisy.

However, US estimates suggest that China is planning to double its strategic nuclear forces and recent media reports claim that Beijing is building more than 100 new silos for intercontinental ballistic missiles in the northwest of the country. If true, this is a strange development because ICBMs in fixed silos are becoming more vulnerable with the increased accuracy of nuclear strikes. China’s recent ICBMs have been road-mobile for precisely this reason. The only rational explanation for new fixed-silo ICBMs is that they’re designed for a new launch-on-warning posture, which suggests new developments in China’s early warning capabilities.

In addition to its strategic nuclear warheads, Beijing has about 2,000 theatre nuclear missiles capable of targeting much of the Indo-Pacific. The majority of them are nuclear-armed, but some of the optionally conventionally armed variants (such as the 4,000-kilometre-range DF-26) can reach the north of Australia.

The main point here for Australia is that unless we acquire missiles with ranges in excess of 4,000 kilometres, we won’t be able to retaliate against any attack on us. But, in any case, for a country of our size to consider attacking the territory of a large power like China isn’t a credible option.

So, resolving the threat posed by the Global Times depends on Washington making it clear to Beijing that any missile attack on Australia, as America’s closest ally in the Indo-Pacific region, would provoke an immediate response by the US on China itself.

America has an overwhelming superiority in being able to deliver prompt global conventional precision strikes.

Beijing also needs to understand that because of the density and geographical distribution of its population, it is the most vulnerable among continental-size countries to nuclear war. The virtual conurbation that extends from Beijing in the north via Shanghai to Guangzhou and Shenzhen in the south would make it particularly susceptible to massive destruction in an all-out nuclear war.

The US has 1,500 deployed strategic nuclear warheads and another 5,000 stockpiled or ‘retired’. (Russia has a similar number of strategic nuclear warheads, totalling about 6,800.) America has more than enough nuclear warfighting capabilities to take on both China and Russia. In the Cold War, the Pentagon planned on destroying a quarter of the Soviet Union’s population and half its industry. For comparison, a quarter of China’s population is about 350 million. In such a nuclear war, China would no longer exist as a functioning modern society.

It might be time we considered acquiring a missile system capable of defending us against ballistic missile attack. The first step could be to fit this capability to the air warfare destroyers, while noting that a nationwide capability would need to be much more extensive.

But in the final analysis, we depend upon the United States—as the only military superpower in the world—to deter China from escalation dominance and its threatened use of ballistic missiles against us.