China Wants to Sink Your Navy with Hypersonic Missiles 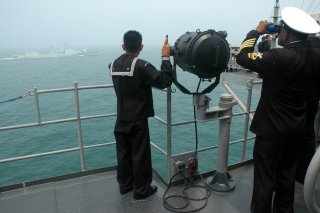 Here's What You Need To Remember: A volley of the YJ-12s could pose a significant threat to even the most sophisticated air defense system.

The Chinese People's Liberation Army Navy (PLAN) has increased the potency of its Luhai-class Type 051B destroyer, Shenzhen (DD 167), with 16 container launchers for YJ-12 supersonic anti-ship missile. The warship, the only one of its class, first entered service in 1999 and was commissioned by the PLAN Navy South Sea Fleet as its flagship. It was originally armed with the YJ-83 subsonic sea-skimming anti-ship cruise missiles (ASCM), which have been described as being comparable to the U.S. Navy's Harpoon.

The YJ-83 boasted an impressive range, but it lacked the strategic impact of the YJ-12 – which has both speed and range. Forbes noted that a volley of the YJ-12s could pose a significant threat to even the most sophisticated air defense system. It also has a large warhead that could make it potentially quite devastating even to capital warships such as aircraft carriers.

Also known as the CM-302 in its export name, the YJ-12 employs a ramjet engine that allows it to cruise at supersonic speed Mach 2 to 3, or a maximum range of 280 to 400 kilometers per hour. The missile reportedly utilizes an inertial guidance system that is coupled with a global navigation satellite system (GNSS). The new missiles are also reportedly being refitted to the PLAN's Sovremenny-class destroyers, which are based on Russian designs from when China upgraded its defense capabilities with Russian technology.

At the time of its introduction of the Shenzhen, it was the largest surface combatant vessel ever commissioned by the PLAN, but despite its increased size and displacement, the destroyer did not feature any significant improvements in weapons systems and sensors and was largely seen to be deployed with rather "meager armament," which include a single HHQ-7 short-range anti-aircraft missile launch, just four twin 76mm guns, and the eight YJ-83 anti-ship missiles.

All this explains the efforts of the Chinese to refit and upgrade the warship. It had been spotted undergoing a modernization refit at the Zhanjiang Naval Base in 2015, which included some significant improvements in its weapons and sensors. In recent years the warship's Type 381A radar was upgraded to the Type 382 and additional Type 364 radar systems.

Last November the Shenzhen returned from its most recent major refit, which included the installation of an HHQ-16 vertical launch system consisting of four sets of eight units and allows it to host 32 ship-to-air missiles to shoot down incoming hostile aircraft and missiles. This replaced the single HHQ-7 SAM launch on the bow deck.

Forbes noted that China's first-generation of modern warships, including the Shenzhen, are unlikely to be as capable as newer and larger types, these upgrades will ensure the ability to pack a heavy punch.

The Shenzhen has participated in numerous military operations, but it also worth noting that it has made port calls to numerous countries, making it a star in naval diplomacy. It now has even more to show off.