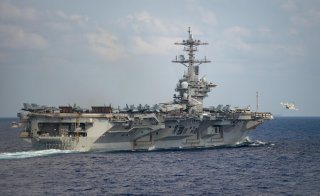 However, there is one potential hiccup with that solution. The Chinese are more than capable of building even longer ranged anti-ship ballistic missiles or cruise missiles. Indeed, China seems to have already done that with the introduction in recent months of the DF-26 “carrier killer” missile. U.S. Naval War College professor and TNI contributor Andrew Erickson wrote in September of 2015 that the new missile might have a range as great as 2,500 miles.