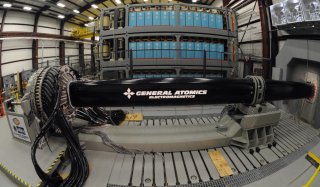 Here's What You Need to Remember: There is the possibility, of course, that the Chinese railgun is a paper tiger of sorts, a hoax designed to make the already-overstretched DoD antsy about its future in the Pacific amid growing tensions over artificial islands in the South China Sea.

While the United States spent years dithering over the future of its much-hyped electromagnetic railgun project, China ate its lunch. The Chinese navy plans to field its own secretive version of the electromagnetic railgun on naval vessels as early as 2025, according to a U.S. intelligence assessment first reported by CNBC back a few years ago.

China's interpretation of the long-theoretical supergun, which utilizes a massive amount of power to create electromagnetic fields to accelerate projectiles to hypersonic velocities, is reportedly capable of “striking a target 124 miles away at speeds of up to 1.6 miles per second," according to CNBC — fast enough to strike Philadelphia from New York in just under a minute.

If the U.S. intelligence assessment is accurate, this is a major strategic coup for the Chinese. Back in February, photos circulating on social media appeared to show a railgun-esque deck gun mounted on the bow of the Type 072III-class landing ship Haiyang Shan. The next month, a People's Liberation Army-run news outlet confirmed that the Chinese navy had achieved a “breakthrough" during sea trials for the new railgun.

The Chinese railgun was first developed in 2011 and then tested in 2014. Over the next three years, the supergun was calibrated for extended operational ranges. Meanwhile, the Office of Naval Research was still trying to figure out how to fire multi-shot salvos with its version of the railgun. Indeed, the U.S. intelligence assessment confirms that the Chinese supergun was first mounted on a naval vessel for at-sea trials even earlier than the PLA said, with initial tests underway as early as December 2017.

The December sea trials are some serious egg on the face of the Pentagon. As Task & Purpose reported around the time, the ONR electromagnetic railgun has been stuck in a research and development “valley of death" after more than a decade of development that cost $500 million. The reason? Shifting priorities within the Pentagon's Strategic Capabilities Office towards other directed energy projects — namely the hypervelocity projectile and solid-state lasers that offer more cost-effective alternatives to the pricey supergun — that left the prospect of future tactical demonstrations up in the air.

There is the possibility, of course, that the Chinese railgun is a paper tiger of sorts, a hoax designed to make the already-overstretched DoD antsy about its future in the Pacific amid growing tensions over artificial islands in the South China Sea. But even if the railgun ends up relegated to the function of shipboard missile defense rather than an offensive weapon, it's very existence is a shot across the bow to the United States when it comes to engineering next-generation weapons.

The War Zone's Joseph Trevithick sums it up perfectly in his analysis of the U.S. intel assessment. “If the PLAN's fleets actually include any significant number of railgun-equipped ships by 2025," he writes. “It is even more likely that the era of near total United States naval supremacy in any prospective conflict, especially in Pacific Region, will have come to a close."