China's Hong Kong Crackdown Is An Extension Of Its Domestic Policy 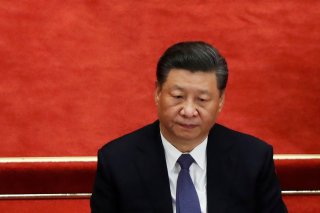 China-watchers are still grappling with the wide-ranging implications of the Hong Kong national security law. Has Beijing really abrogated the legally-binding Sino-British Joint Declaration after just 23 of the agreed-upon 50 years? After all, what truly separated Hong Kong from the mainland were the freedoms guaranteed by its Western-style rule of law.

Nor has Beijing’s strident foreign policy abated. China’s ramped-up ‘wolf warrior’ diplomacy at a time when the world is reeling from the COVID-19 pandemic appears to signal a hardening of the post-2008 domestic open-close (fang–shou) turn that accompanied what Western observers dubbed Chinese foreign ‘assertiveness’.

The reason for Chinese President Xi Jinping’s brazen move in Hong Kong, and the years of combative nationalist rhetoric that preceded it, should not be sought primarily in the value of Hong Kong, and Beijing’s desire to quash the massive and at-times violent pro-democracy demonstrations. Neither is it a reaction to what Chinese state media refers to as interference by ‘hostile foreign forces’ — coded language for liberal positions taken by Western countries and ostensibly subversive activities undertaken by Western NGOs.

The better explanation lies instead in the socioeconomic and especially macroeconomic vulnerabilities present in China, and the danger of the regime losing face for being perceived as unable to end domestic instability. Chinese leaders’ propaganda-fuelled hyperbole comes with an inherent risk: behaviour must match the tough talk.

David Shambaugh appropriately characterises China as ‘hard on the outside, soft on the inside’. Maintaining a veneer of stability and thereby its ‘Mandate of Heaven’ to rule is key for the Chinese Communist Party (CCP) to remain in power.

China’s spectacular economic growth over the past 40 years is historically unparalleled. That the annual growth of China’s GDP has fallen from an average of 13 per cent before the 2008 financial crisis to a ‘new normal’ of, officially, around 6 per cent is also well charted. Less well known is that the successful formula responsible for China’s economic miracle has run its course, potentially cutting short the country’s long-touted ‘period of strategic opportunity’.

According to a 2018 People’s Daily editorial, China is now at a ‘critical historical juncture’ in bringing about what the CCP terms the ‘great rejuvenation of the Chinese nation’ and make China into a ‘moderately prosperous society’ by 2021 and a high-income ‘prosperous and strong’ country by 2049.

Fast-forward to the National People’s Congress in May 2020 and it becomes clear to what end the nation ought to be mobilised and, conversely, what needs deflection away from, tightening the authoritarian reins. The reforms of the 2013 Third Plenum called for allowing the market to play ‘a decisive role’ in resource allocation. But in addressing ‘vested interests’ at the provincial and state-owned level, the CCP has been unable or unwilling to fully implement these much-needed supply-side reforms.

The Chinese leadership has long known that the old ‘China Model’ had become ‘unstable, unbalanced, uncoordinated and ultimately unsustainable’. Based on heavy industry and low-value exports, and real estate and infrastructure, the old economy is in need of more and more credit for a much lower yield.

During May’s Congress, Chinese Premier Li Keqiang announced limited stimulus measures — the limits of what credit could accomplish has already been reached. From unprofitable multinational conglomerates built with cheap credit to decentralised governments that have off-the-books debt with dubious financiers, China’s mountain of debt will comprise a whopping 300 per cent of GDP by 2022.

More harmful still, the measures follow the same-old rejected playbook. It was announced in July that the position of China’s 130,000 state-owned companies are to be bolstered in the next three years. Add to this the demographic time bomb, vast income inequality, growing unease among migrant workers in the big cities, anxieties over environmental and food security, and the perceived moral vacuum in China’s materialistic society, and the insecurities within Beijing’s leadership begin to emerge.

Rather than a ‘Chinese century’, there is a danger of a long-run economic slump that may spell a ‘Chinese decade’, meaning China’s economy could peak before it can overtake the United States. Controversial goals, then, such as full reunification with Hong Kong, should be achieved while China’s relative power and influence are still on a rising trajectory.

With the COVID-19-induced drop in global demand expected to be even worse than after the 2008 financial crisis, the pivotal question is: can China still fully escape the middle-income trap?

And given the steep rise of macro and socioeconomic uncertainties in China, will the emphasis on Beijing’s post-1978 ‘social contract’ — individual and national prosperity in exchange for giving up the prospect of political liberties — shift even further from the economic to the nationalist pillar, resulting in intensified border disputes on the Tibetan Plateau, across the Taiwan Strait and in the East and South China seas?

Chinese leaders see their provocative moves as mostly defensive in nature and tied to their domestic legitimacy. The Trump administration’s expedient and misguided attempt to get Europe and the ‘Quad’ — Australia, India, Japan — into a Cold War with China is based on a serious mischaracterisation of China and its intentions.

There is no ideological struggle with a ‘Communist China’ in the classical expansionist sense. In a spiral of confrontation and with bipartisan consensus in the US Congress, even new American leadership after November would find it hard to navigate back towards more manageable China–US competition.

Friso Stevens is a PhD Candidate at the Institute of Security and Global Affairs, Leiden University.

This article first appeared on the East Asia Forum.