Is China's Military Right To Bet Everything On Stealth Weapons? 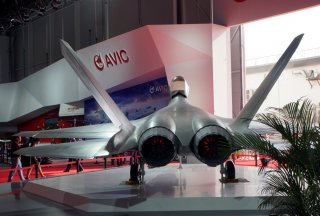 Here's What You Need To Remember: China’s stealth expansion isn’t without hiccups, as Beijing’s engineers still struggle with certain key technologies. But the Pentagon doesn’t expect technological challenges to halt the Chinese air force’s transformation into a stealthy, “fifth-generation” force.

The Chinese air force is expanding its fleet of J-20 radar-evading stealth fighters while also preparing to field FC-31 stealth fighters and H-20 long-range stealth bombers, the U.S. Defense Department warned in the 2019 edition of its annual report on Chinese military developments.

Modernizing the People’s Liberation Army Air Force, or PLAAF, is a top priority of Chinese military leaders. “The PLAAF, in particular, has received repeated calls from its leadership to become a truly ‘strategic’ air force, able to project power at long distances and support Chinese national interests wherever they extend,” the Pentagon reported.

The PLA’s planned fielding of a fifth-generation fighter force will bolster its air-to-air capability, adding to the air power of China’s fourth-generation Russian-built Su-27/Su-30 and J-11A, and the indigenous J-10A/B/C, J-11B and more advanced J-16 fighters.

A flight of J-20s performed a flyby at the PLA 90th anniversary parade in July 2017, and the J-20 may have begun active service in small numbers, possibly with a testing and training unit.

A modified FC-31 prototype made its first flight in late December 2016, although production is unlikely to begin until at least 2019. China is having difficulty with the engines and radars for these aircraft.

The Pentagon clearly has less information on the H-20 bomber than it does on the J-20 and FC-31.

Following PLAAF commander Gen. Ma Xiaotian’s 2016 public statement that China was developing a new generation of long-range bombers, a number of reports suggest the new bomber, likely named the H-20, could debut sometime in the next decade with the following features: a stealthy design, employing many fifth-generation technologies; a likely range of at least [5,300 miles]; a payload of at least 10 metric tons; and a capability to employ both conventional and nuclear weaponry.

A photograph of a possible H-20 prototype depicted a flying wing airframe akin to the B-2 bomber and X-47B stealth unmanned combat aerial vehicle.

China apparently is developing a fourth radar-evading warplane, a medium-weight fighter-bomber, that the Pentagon’s annual report does not mention. The new JH-XX fighter-bomber, however, did feature in a separate, January 2019 report from the U.S. Defense Intelligence Agency.

“The PLAAF is developing new medium- and long-range stealth bombers to strike regional and global targets,” the DIA reported.

Stealth technology contin­ues to play a key role in the development of these new bombers, which probably will reach initial operational capability no sooner than 2025.

These new bombers will have additional capabilities, with full-spectrum upgrades com­pared with current operational bomber fleets, and will employ many fifth-generation fighter technologies in their design.

In service, the JH-XX could complement or replace existing JH-7 fighter-bombers while the larger H-20, which could be similar in size and capability to the U.S. Air Force's own B-2 stealth bomber, flies alongside the PLAAF's new, non-stealthy H-6K bombers.

If there's one thing that might hold back the JH-XX's development, it's the new plane's engine, just as problems integrating a Chinese-built engine reportedly have slowed development of the J-20 and FC-31 fighters.

David Axe serves as Defense Editor of the National Interest. He is the author of the graphic novels  War Fix, War Is Boring and Machete Squad.This article was first published last year and is being republished due to reader interest.