China's Navy Is Growing Larger At An Alarming Pace 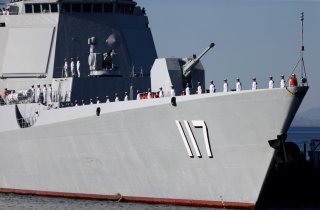 Here's What You Need To Remember: America's allies contribute their own forces to international efforts to manage China's rise as a military power. But that doesn't mean the United States shouldn't reconsider its own strategy in light of China's numerical advantage at sea.

The People's Liberation Army Navy possesses between 313 and 342 warships, the U.S. Office of Naval Intelligence estimated.

David Axe served as the former Defense Editor of the National Interest. He is the author of the graphic novels War Fix, War Is Boring and Machete Squad. This first appeared in 2019 and is being reposted due to reader interest.