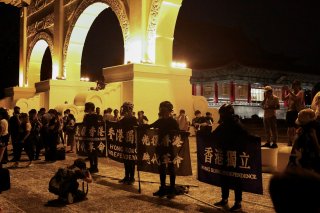 Tensions are running high in Hong Kong at a decision by China’s ruling body, the National People’s Congress (NPC), authorising its standing committee to draft a national security law for Hong Kong. The decision, drafted in secret, is likely to become law by August.

It should never have come to this. Article 18 of Hong Kong’s Basic Law – the territory’s de facto mini-constitution that came into effect after the British handover in 1997 – specifically limited Beijing from applying national laws to the territory, except in matters of defence and foreign affairs. The NPC decision changes all that. It not only authorises the standing committee to draft such a law, it allows the law to be inserted into Hong Kong’s Basic Law by promulgation.

This completely by-passes the Legislative Council, the law-making body of the Hong Kong Special Administrative Region (HKSAR) government, and creates new national security crimes. It talks, for example, of “unflinchingly” preventing, stopping and punishing any conduct that seriously endangers national security, such as separatism, subversion of state power, or organising and carrying out terrorist activities. Any activities by foreign and overseas forces that interfere “in any fashion” in the affairs of Hong Kong, and any overseas forces that use Hong Kong to carry out “separatist, subversive, infiltrative or destructive activities”, will be punished.

The US Secretary of State, Mike Pompeo, claimed the NPC’s decision means Hong Kong is no longer politically autonomous from mainland China. The US will could now revoke the special status it accords Hong Kong, and which gives it favourable trading terms. This, married with further US sanctions, is a threat to China’s economy. Worse still, it would be fatal to Hong Kong’s standing as one of the world’s major financial centres.

Under a 1984 Joint Sino-British Declaration, Britain retains a watching brief, sanctioned by an international treaty lodged with the UN. Once upon a time, such treaties meant something. Despite this, apart from a few stalwart voices, the UK’s initial response was muted, despite the fact that Hong Kong was a British colony until 1997. However, on May 28, the NPC decision finally prompted the British government to offer 300,000 Hong Kongers sanctuary in the form of the right to live in the UK.

With China becoming a political hegemon as well as an economic powerhouse, its leaders feel able to unilaterally declare the joint declaration obsolete, bar British critics from entering Hong Kong, and denounce all foreign criticism as foreign interference.

It would be a mistake to see the NPC’s decision as just another aspect of the US-China trade war. It comes after a series of protracted and increasingly unsuccessful attempts by the Chinese Communist Party (CPC) to capture the hearts and minds of Hong Kong people. There was a short window, just after the 1997 handover, when optimism was high and this goal might have been feasible.

But the years since 1997 have been marked by sniping attacks on Hong Kong’s legal system, chipping away at what Hong Kongers see as the territory’s core value: the rule of law. Its independent judges have been termed “administrators” who must toe the party line. Retiring judges have spoken of the impending demise of the rule of law.

Since 1997, the Chinese government’s response to popular protest has been single-minded and blunt repression. Invariably, such conflagrations leave only two escape routes: submission or retraction.

This is what happened in 2003, when HKSAR government first proposed a national security law, as it was obliged to do under Article 23 of the Basic Law. This aimed to prohibit any act of treason, secession, sedition or subversion against the Chinese government.

The broad, sweeping nature of its provisions, which included the prohibition of foreign political organisations or bodies from conducting political activities within the region, caused a storm of protest – on July 1 2003, over 500,000 people demonstrated against the proposal. After a standoff, it was eventually withdrawn.

The NPC latest decision reveals that while the 2003 bill was gone, it was not forgotten. Frustrated with the inability of the HKSAR government to pass such legislation, China secretly planned its own law. In the meantime, it nibbled away at some of Hong Kong’s other legal defences.

In 2019, the HKSAR government was pressured by Beijing to introduce a new extradition law. Overnight, Hong Kong, once seen as a city of law, became a city of street battles. The massed ranks of para-military police, equipped with tear gas, pepper spray, water cannons and rubber bullets, openly fought protesters on the streets.

There was violence from both protesters and the police, but while numerous by-standers and protesters felt the full force of the HKSAR’s legal and para-military capability, demands for an independent inquiry into police conduct have been rejected by Carrie Lam, Hong Kong’s chief executive. My own phone buzzed with messages from former students caught up in events: one messaged that the friend standing beside her had just been hit in the stomach with a rubber bullet. My former student was acting as a frontline medic and, though clearly identified as such, was forced “run for her life” from the police.

Beijing deemed her and others like her “subversives”, “secessionists”, and “terrorists”. This word has now been added to the lexicon of crimes by the NPC’s new decision, reflecting China’s recent predilection for defining its opponents as “terrorists”.

The NPC decision states that China will oppose “foreign interference” in Hong Kong and will punish foreign forces which use Hong Kong to carry out “separatist, subversive, infiltrative or destructive activities”. In their own struggle for power before 1949 this is exactly how Chinese communists used Hong Kong. Ever since then they have worried that their enemies would also use the territory as a “base for subversion” to overthrow the communist regime. It is perhaps no wonder, then, that given the domestic and international challenges to President Xi Jinping’s authoritarian regime, China sees the Hong Kong protests through a lens of paranoia about the rest of the world.

The NPC decision does not prohibit sedition, treason, theft of state secrets, or ties with foreign political organisations. But it would be naive to think that the new law will ignore such activities. The NPC’s decision also states that bodies such as the Ministry of State Security will be allowed to operate in Hong Kong – which could mean spying on schools, universities, the media and monitoring people’s personal social media accounts for any sign of dissent.

The possibility that the new national security crimes may violate the International Covenant on Civil and Political Rights can no longer be relied upon to check China’s intentions. As its dismissal of the Joint Sino-British Declaration suggests, China feels able to disregard laws it sees as against its interests. On Hong Kong as elsewhere, Beijing is prepared to challenge the rules-based international order.