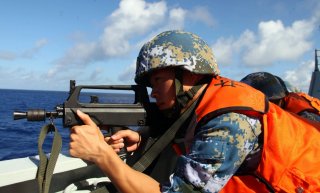 Here's What You Need To Remember: The QBZ-95-1 is issued with a bayonet and, along with six WY-91 hand grenades, forms the firepower of the average PLA soldier. Each nine man PLA squad has two fire teams, with one grenadier per fire team. The grenadier carries a QBZ-95-1 equipped with a 35-millimeter underbarrel grenade launcher similar in concept to the long-serving U.S. Army M203 grenade launcher.

Kyle Mizokami is a defense and national-security writer based in San Francisco who has appeared in the Diplomat, Foreign Policy, War is Boring and the Daily Beast. In 2009 he cofounded the defense and security blog Japan Security Watch. You can follow him on Twitter: @KyleMizokami. (This first appeared last year.)