China's Troops Have a Training Problem 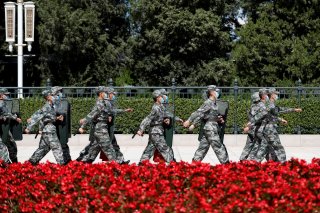 Here's What You Need To Remember: China, despite boasting an impressive army and weapons program, has not actually gone to war in forty years. This is a good thing, but it means that their soldiers lack realistic training - a problem that PLA strategists have increasingly acknowledged.

A surprising article in Chinese state media makes a rare admission of a serious weakness in the Chinese military.

But with zero recent combat experience, the PLA's doctrine and training in some cases is inadequate, Global Times reported. The government-run news organization cited an army war game as one example.

The Chinese army since 2015 has been working to develop new doctrine for high-tech ground war, the U.S. Defense Intelligence Agency explained in its January 2019 report on the PLA. "At the tactical level ... battalion training most likely includes use of precise, long-range fire to maximize protection and surprise; disper­sion of formations of weapon platforms while relying on advanced communications technol­ogies; and increasingly lethal munitions to enable [army] commanders to produce mass effects on an enemy."

But a lack of interest in military service among Chinese youth could hold back recruitment and undermine efforts to combine modern tactics and doctrine with the latest weaponry. "Military service probably will remain a less attractive career option if Chi­na’s economy stays healthy," the DIA predicted. "Although Chinese youth remain interested in the career field, interest is not widespread."

The People's Liberation Army Air Force also is struggling to develop doctrine for its new weapons, the DIA found. "Numerous professional articles and speeches by high-ranking Chinese officers indicate the PLAAF does not believe that its past training practices prepared its pilots and other per­sonnel for actual combat. Unrealistic training manifested itself in multiple ways that hin­dered the PLA’s air combat capabilities."

"The PLA recognizes that a gap exists between the skills of its pilots and those in 'the air forces of powerful nations,'" the DIA continued in its report. "To address training weak­nesses, the former PLAAF commander said that when the PLAAF trains, it must 'train for battle' instead of 'doing things for show…[or] going through the motions.'"

The air force might be making progress. "During the past few years, the PLAAF has revamped its training program and now seeks to replicate real-world combat environments as closely as possible," the DIA explained. "Through its four 'name-brand exercises'—Red Sword, Golden Helmet, Golden Dart, and Blue Shield—the PLAAF is making incremen­tal improvements to its training regimen."

The stakes are high for the PLA. "As China reportedly continues to develop weapons like stealth bombers, rail guns and aircraft carriers with an electromagnetic catapult, PLA soldiers need to pay extra attention to maximizing them," Global Times paraphrased a Beijing-based military expert as saying.

David Axe serves as the new Defense Editor of the National Interest. He is the author of the graphic novels War Fix, War Is Boring and Machete Squad. This article first appeared in January 2019.